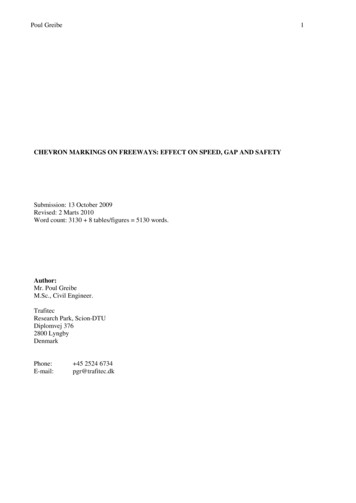 Poul Greibe2ABSTRACT45% of all injury accidents on Danish freeways are categorised as accidents with vehicles driving in thesame direction. On a year basis, these accidents results in more than 120 killed and injured persons. Rearend accidents typical occur in situations with very short headways and/or in combination with high speedlevels.Inspired by positive results from the use of chevron markings in UK and France, a trial of chevronmarkings on Danish freeways, to help drivers to choose a safer distance to the vehicle in front, was initiatedby the Danish Road Directorate in 2007. The chevron markings were establish on 5 road sections (each 4km long), and consist of a series of white arrowheads on the road surface at 36 m intervals. The chevronmarkings were accompanied by road side signs advising drivers to keep a distance of 2 chevron markingsto the vehicle in front.In order to evaluate the use of chevron markings, traffic flow, speed and gaps were measured by use ofloop-detectors at 3-4 locations on each road section. One detector was situated upstream from themarkings; one detector on the road section with markings and one or two detectors were situateddownstream from the markings (4-12 km downstream from the chevron markings). Data on speed, trafficflow and headways were collected 1 month before and 2 month after the installation of chevron markings.In addition, in order to estimate the long term effect, the plan is to collect traffic data again 2 year after theinstallation.The short-term effect by chevron markings (2 month after) showed significant fewer vehicles with smallgaps (gap 1sec) compared to the before situation. The largest reduction was found in the left lane. Thenumber of vehicles with gap less than 2 seconds was also reduced, but the reduction was smaller. Speedwas reduced slightly. In general, the largest effects on gaps and speed were found on road sections withchevron markings, but also an effect 4-7 km after the marking (downstream) could be found. Furtherdownstream ( 10 km), no effect from the markings could be measured. The long-term effect (2 year after)has not been estimated yet.A questionnaire survey among drivers indicated that the purpose of the markings was understood, and thatmajority of drivers have changed behaviour (greater gap to vehicle in front).A small before-after accident analysis, based on two road section with chevron markings on freewaysestablished back in 2004, showed a reduction in accidents. The analysis is based on very few accidentsthough, and the estimate is uncertain. The accident analysis will be repeated again using a longer beforeafter period.

Poul Greibe31. INTRODUCTIONIn the Danish traffic act, it is stated that “the distance to vehicles in front should be adjusted, in order toreduce risk of collisions, in case the vehicle in front reduce speed or stops”. However, drivers tend to haveinsufficient headways when driving on the freeways which lead to accidents. 45% of all personal injuryaccidents on the Danish freeways involves vehicles driving in the same direction and 25% are pure rear-endaccidents. A contributory factor in rear-end accidents are to short distance between vehicles compared tothe speed.In the 1990’s, trials with chevron markings on freeways were tested in UK and France and the results weremainly positive (3, 4). The distance between vehicles were increased and rear-end accidents were reduced.Based on these experiences, the Danish Road Directorate decided to test the use of chevron markings onDanish national freeways.In 2004, three road sections were equipped with chevron markings, and in order to increase the experience,five new test road sections were equipped with chevron markings in 2007. This paper summarises theoverall finding from an evaluation programme that was conducted in 2008 (1).2. TEST ROAD SECTIONSA total of five freeway road sections were chosen to be part of the trial. The criteria used to indentifysuitable locations were: The presence of stationary loop detectors in order to collect traffic data A suitable traffic density with no traffic flow break downs. 4 lane freeway (2 lane in each direction) No future plans for reconstruction or re-pavement/resurfacing The presence of rear-end accidentsThe five test road sections are shown in table 1.TABLE 1. Test road sections with chevron markings.Test No. ngth(km)3.9No. 2M60HorsensSouth23,000140.0136.04.0No. 3M30KøgeNorth21,00047.443.63.8No. 4M30KøgeSouth21,00042.245.93.7No. 5M40Aarup – EjbyWest29,000187.6191.64.0The length of test road sections with chevron markings varies between 3.7 and 4.0 km and the traffic flowin the analysis direction varies between 21,000 and 29,000 vehicles per day. The speed limit on the testsection is 130 km/h (general speed limit on freeways in Denmark). Test section 3 and 4 have no on/offramps while the remaining sections have one on/off-ramp located on the road section. Heavy vehicles arenot allowed to overtake (at any time) on test section 5, while overtaking by heavy vehicles are prohibitedfrom 06-18h on section 3 and 4.The chevron markings were established in October-November 2007. The markings are shaped as chevronsand placed in both lanes with a distance of 36 m, see figure 1. When driving 130 km/h (the speed limit), the

Poul Greibe7TABLE 3. Estimated average effect in relation to control sections.The number of , or n’s indicate the number of sections with significant decr ease, significantincr ease or no significant effect.LaneParameterChevron sectionSpeed (km/h)-3 km/hDownstream I(1-4 km from chevron) Right laneG 1secG 2secSpeed (km/h) n nnnn-1 km/h-7% nnnn-4% nnn 1%-1 km/h nn0 km/h-1%-4% nnn n nn0% nnnn Left laneG 1sec-11%G 2sec nn -1%Downstream II(7-12 km from chevron)0% n nn0% nn0 km/h 1 km/h-2% nn-1% nSpeed and gap distribution depend highly on traffic flow and in order to study these relations in moredetail, a number of speed-flow curves and gap-flow curves have been produced for the test road sections.Figure 3 shows an example from the chevron road section on test road 4. It illustrates the observed speedflow relation before and after the installation of chevron markings for left and right lane. The drop in speed(approx. 2-4 km/h) is present at all flow levels, but seems to increase at high flow volumes.FIGURE 3. Example of speed-flow curve (before/after) for test road 4.Speed - flowTest road 4 (chevron section)140130120Bef oreSpeed (km/h)Left laneAf ter110Right lane1009080050100150200250300350400PCU (passenger car units) per 10 minFigure 4 shows the observed gap-flow curve before and after the installation of chevron markings. At lowtraffic volumes, the share of small gaps ( 1sec) is close to 0%. The share of small gaps increases up to

Poul Greibe8more than 40% in the left lane and 10% in the right lane when the traffic volumes are increased. The effectfrom before to after is clearly shown for the left lane, but not significantly for the right lane.FIGURE 4. Example of gap-flow curve (before/after) for test road 4.Share of gap 1 secTest road 4 (chevron section)6050Bef oreLeft lane40Share of gap 1sec (%)Af ter3020Right lane100050100150200250300350Vehicles per 10 min5. ROAD USER FEED BACKThe road user experience and satisfaction with chevron markings have been studied by use of telephoneinterviews. A total of 916 respondents were asked about their experience and understanding of the chevronmarkings. The interviews were conducted 4-6 month after the installation. The main results are summarisedbelow: 80% of the respondents have noticed the chevron markings on freewaysAmong these 80% (that did notice the chevron markings), it was found that: 96% knew the purpose of the markings.88% said that the marking made them keep a distance of two chevrons signs, or 2 seconds to thevehicle in front.60% experience that other roads users keep a greater distance63% think the chevron marking to be “a great help” or “some help” (to keep a safe distance)30% answered that the chevron markings was neither “to some help” or to “any inconvenience”3% felt “inconvenience” by the chevron markings.The overall results indicate that road users are mainly positive about the use of chevron markings.

Poul Greibe96. PRELIMINARY SAFTY EFFECTAs mentioned earlier, two road sections with chevron markings were established in 2004. A minor accidentanalysis (before-after) have now been conducted based on a 4 year before period (1. April 2000 – 1.April2004) and a 4 year after period (1. June 2004 – 1. June 2008). The observed accidents before and after thechevron markings were installed are shown in table 4. All types of accidents on the road section withchevron markings are included in the study.In general, the number of accidents is too small to measure any significant safety effect. In total, there were3 personal injury accidents in the before period and 1 in the after period. The corresponding numbers fordamage only accidents are 2 before and 1 after.The table also shows before/after figures for slight damage only accidents. These types of accidents areunder normal conditions excluded from the safety analysis since they are reported very differently by thepolice. There are 4 slight damage only accidents in the before period and 6 in the after period.The general accident trend for other similar freeway road sections in the same period shows a slightdecrease in personal injury accidents but a significant increase in damage only accidents. The chevron roadsections tend to perform slightly better compared other similar roads sections. However, the number ofaccidents is still too small to estimate the safety effect yet.It should be mentioned, that no significant changes in the accident picture (composition of accident e.g.rear end/single accidents) was found.A more extensive before/after safety study are planned to be conducted in 2012 when the five new testsections have been in place for a longer period.TABLE 4. Observed police recorded accidents before/after installation of chevron markings on twofreeway road sections.Police recorded fterPersonal injury211031Damage only210021Total421052Slight damage only351146Total – all accidents7721987. CONCLUSIONThe Danish Road Directorate has installed chevron markings on a number of freeway road sections. Theshort term effect on the chevron road sections shows: Reduced speed (1-3 km/h) Reduced share of vehicles with gap 1sec (7-11%) The left lane has the largest reduction in small gapsThe observed effect is also seen 1-4 km down-stream from the chevron markings. However, the effect issmaller. 7-12 km down-stream from the markings the effect is gone.

Poul Greibe10Even though the share of small gaps ( 1sec) is reduced by the chevron markings, there is still a largepotential for further reductions. The share of vehicles with a gap 1sec in the left lane are at some roadsection still 20-30%.The road user feed back are mainly positive. The drivers understand the purpose of the markings and theyrate the markings as helpful to keep a safe distance to vehicles in front.A preliminary before/after accident study indicate that the markings have positive effect on safety. Theeffect is however still uncertain due to limited accident data.Further studies are needed to verify the findings regarding driver behaviour. It is recommended to study thelong-term effect from the chevron markings on speed and gap-distribution. Also the accident analysisshould be conducted again when more accident data is available. Another issue that needs further researchis the optimal length and frequency of road section with chevron markings in order to achieve the besteffect. The tested road sections in this study were 3.7-4.0 km long (approx. 2 min drive) but the optimallength is unknown. Chevron markings have so far only been used on a few locations and it must beconsidered how often chevron markings can be used on a freeway sections before the effect will bereduced.8. REFERENCES1 Chevron markings on freeways – effect on speed and headway(Report in Danish - Afstandsmærker på motorveje – effekt på hastighed og afstand mellemkøretøjer).Poul Greibe. Trafitec report, June 2008.2 Chevron markings on freeways – How does it effect driver behaviour ? and traffic safety?(Danish paper - Afstandsmærker på motorveje – hvordan virker de på adfærden ? og påtrafiksikkerheden ?Poul Greibe. Vejforum 2008.3 M1 Chevron Trial – Accident studyProject report 118, TRL, 19954 Installation and evaluation of chevron markings on motorwaysContractor report 304, TRL, 1992

The Postal Markings of New Jersey Stampless Covers: an Update