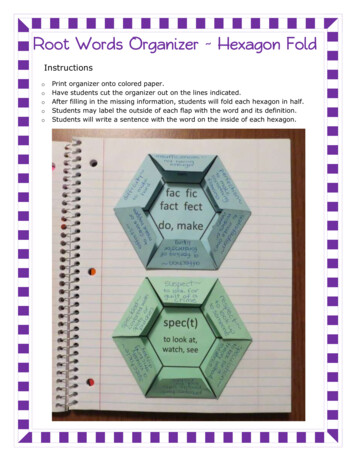 Root Words Organizer Hexagon FoldInstructionsoooooPrint organizer onto colored paper.Have students cut the organizer out on the lines indicated.After filling in the missing information, students will fold each hexagon in half.Students may label the outside of each flap with the word and its definition.Students will write a sentence with the word on the inside of each hexagon.

Root WordWhen Dorothy, who was an orphan, first came to her, Aunt Em had been so startled by thechild's laughter that she would scream and press her hand upon her heart wheneverDorothy's merry voice reached her ears; and she still looked at the little girl with wonder thatshe could find anything to laugh at.Latin Rootvocvokto call orsummonWord vokeequivocalprovoke Gay Miller

Root WordBut the little woman evidently expected her to answer; so Dorothy said, with hesitation, "Youare very kind, but there must be some mistake. I have not killed anything."She placed a bar of iron in the middle of the kitchen floor, and then by her magic arts madethe iron invisible to human eyes."I am now going away to make a visit. While I am gone the Scarecrow will rule over you. Icommand you to obey him as you would me."Latin Rootvidvissee orlook atWord deo Gay Miller

Root WordChapter 3 Toto did not like this addition to the party at first. He smelled around the stuffedman as if he suspected there might be a nest of rats in the straw, and he often growled in anunfriendly way at the Scarecrow.Chapter 10 Because if you did not wear spectacles the brightness and glory of theEmerald City would blind you.Chapter 18 The Scarecrow sat in the big throne and the others stood respectfully beforehim.Latin Rootspec(t)to look at,watch, seeWord ctperspectivecircumspect Gay Miller

Root WordChapter 4 Many crows and other birds flew into the cornfield, but as soon as they saw methey flew away again, thinking I was a Munchkin; and this pleased me and made me feelthat I was quite an important person.Chapter 10 Taking a big golden key from a peg on the wall, he opened another gate, andthey all followed him through the portal into the streets of the Emerald City.Chapter 10 In the center of the chair was an enormous Head, without a body to support itor any arms or legs whatever.Latin RootportcarryWord olioportalsupportimport Gay Miller

Root Words Organizer Hexagon Fold Instructions o Print organizer onto colored paper. o Have students cut the organizer out on the lines indicated. o After filling in the missing information, students will fold each hexagon in half. o Students may label the outside of each flap with the word and its definition. o Students will write a sentence with the word on the inside of each hexagon.