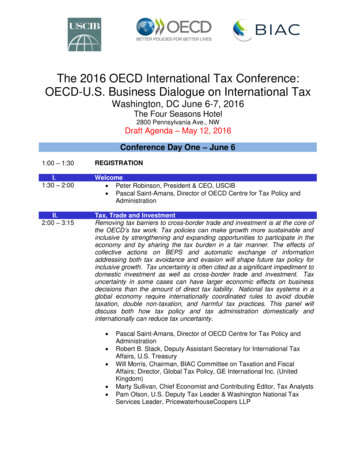 Conference Day Two – June 78:00 – 8:30CONTINENTAL BREAKFASTV.8:30 – 10:00Permanent Establishments: They’re back In 2012, the OECD released for comments a revised version of proposedchanges to the Commentary on Article 5 (the definition of permanentestablishment) of the OECD Model Tax Convention. These proposedchanges dealt with a number of controversial interpretative issues related tothat definition.These changes were put aside, but not forgotten, during the work on Action 7of the BEPS Action Plan. The OECD is currently working on the integration ofthe 2012 proposed changes with the changes made to Article 5 by theReport on Action 7, with a view to producing the new version of Article 5 andits Commentary that will be included in the next update of the Model TaxConvention.The panel will review the main issues that are being dealt with as part of thatconsolidation work. Jacques Sasseville, Head, Tax Treaty Unit, OECD Centre for TaxPolicy and AdministrationQuyen Huynh, Associate International Tax Counsel, U.S. TreasuryPorus Kaka, President, International Fiscal Association (IFA)Manal Corwin, National Leader, International Tax, KPMG10:00 – 10:20REFRESHMENT BREAKVI.10:20 – 12:00Transfer Pricing: Risky Business (Part I)This first session on Transfer Pricing will examine the operation of the riskframework in the revised Chapter I of the OECD Transfer Pricing Guidelines,and will consider its implications for the current work on guidance on theattribution of profits to PEs. The session will also consider how theframework on risk and synergies can inform the work on the transfer pricingaspects of financial transactions. 12:00 – 1:30Andrew Hickman, Head of Transfer Pricing Unit, OECD Centre forTax Policy and AdministrationMike McDonald, Financial Economist, U.S. TreasuryKarine Uzan-Mercie, Vice President, Head of Tax & Vice President,Corporate Initiatives, Coca-Cola EnterprisesPaul Morton, Head of Group Tax, RELX GroupLUNCHEON AND KEYNOTE ADDRESSJohn Koskinen, Commissioner of the Internal Revenue Service

VII.1:30 – 2:30Interest DeductibilityBecause the use of related party interest deductions is one of the easiestways to accomplish BEPS, the Report on Action 4 of the BEPS Action Planestablishes a common approach for countries to take in preventing baseerosion through the use of interest expense and other financial paymentsthat are economically equivalent to interest. This panel will discuss thevarious elements of the common approach and its application. VIII.2:30 – 3:30Achim Pross, Head, International Cooperation and Tax AdministrationDivision, OECD Centre for Tax Policy and AdministrationMike Williams, Director, Business and International Tax, HM TreasuryJason Yen, Attorney Advisor, U.S. TreasurySaul Rosen, Senior Tax Counsel, CitigroupThe Multilateral Instrument: Moving from Policy to RealityThe work on BEPS resulted in a number of agreed changes to the OECDModel Tax Convention. Given that there are more than 3,000 bilateraltreaties in existence, however, implementing these changes through bilateralnegotiation could take years, if not decades. Action 15 of the BEPS ActionPlan called for the development of a multilateral instrument to enablecountries to swiftly amend their tax treaties to implement the treaty-relatedBEPS recommendations. An Ad Hoc Group consisting of 95 countries and anumber of non-State jurisdictions and international organisations was createdfor this purpose, and the development of the multilateral instrument began in2015, with the goal of reaching agreement by the end of 2016.This panel will examine the main issues being addressed by the Ad HocGroup, including 1) the challenge of arriving at a single instrument to modifya widely varied network of existing treaties; 2) how to incorporate flexibilitywhile maintaining clarity and coherence; and 3) how to develop an effectiveprovision on arbitration. Jesse Eggert, Senior Advisor--BEPS, OECD Centre for Tax Policyand AdministrationMike Williams, Director, Business and International Tax, HM TreasuryHenry Louie, Deputy to the International Tax Counsel (Treaty Affairs),U.S. TreasuryMary Bennett, Partner, Baker & McKenzie3:30 – 3:50REFRESHMENT BREAKIX.3:50 – 4:50Transfer Pricing: Risky Business (Part 2)This second transfer pricing session will examine the implications of the riskframework for revised guidance on profit splits. The session will alsoconsider implementation of the approach to Hard-to-Value Intangibles, andthe implications of the revised guidance on cost contributions arrangements. Andrew Hickman, Head of Transfer Pricing Unit, OECD Centre for

Porus Kaka, President, International Fiscal Association (IFA) . attribution of profits to PEs. . 2015, with the goal of reaching agreement by the end of 2016. This panel will examine the main issues being addressed by the Ad Hoc Group, including 1) the challenge of arriving at a single instrument to modify .

Teachers’ Pedagogical Knowledge and the - OECD

ARTICLES OF THE MODEL - OECD