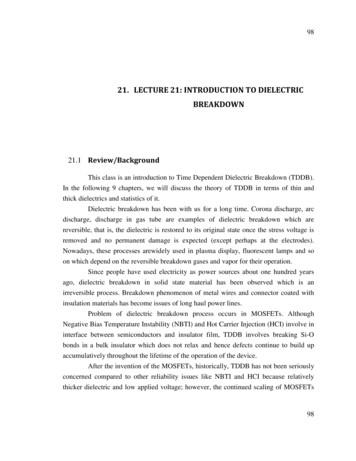 9821. LECTURE 21: INTRODUCTION TO DIELECTRICBREAKDOWN21.1 Review/BackgroundThis class is an introduction to Time Dependent Dielectric Breakdown (TDDB).In the following 9 chapters, we will discuss the theory of TDDB in terms of thin andthick dielectrics and statistics of it.Dielectric breakdown has been with us for a long time. Corona discharge, arcdischarge, discharge in gas tube are examples of dielectric breakdown which arereversible, that is, the dielectric is restored to its original state once the stress voltage isremoved and no permanent damage is expected (except perhaps at the electrodes).Nowadays, these processes arewidely used in plasma display, fluorescent lamps and soon which depend on the reversible breakdown gases and vapor for their operation.Since people have used electricity as power sources about one hundred yearsago, dielectric breakdown in solid state material has been observed which is anirreversible process. Breakdown phenomenon of metal wires and connector coated withinsulation materials has become issues of long haul power lines.Problem of dielectric breakdown process occurs in MOSFETs. AlthoughNegative Bias Temperature Instability (NBTI) and Hot Carrier Injection (HCI) involve ininterface between semiconductors and insulator film, TDDB involves breaking Si-Obonds in a bulk insulator which does not relax and hence defects continue to build upaccumulatively throughout the lifetime of the operation of the device.After the invention of the MOSFETs, historically, TDDB has not been seriouslyconcerned compared to other reliability issues like NBTI and HCI because relativelythicker dielectric and low applied voltage; however, the continued scaling of MOSFETs98

100Fig. 21.1. Tree and Bush type electric discharge structuresThis was a very important reliability issue, especially in long haul underseacables. Lightning is also a dielectric breakdown phenomenon, where the clouds and theground act like the plate of a capacitor and the air in between being the dielectric. Thephysics of the breakdown is same as in thick dielectrics (same fractal dimension)Fig. 21.2. An example of thick dielectric breakdown100

101On top of that, We observe TDDB of thin dielectrics in modern CMOS inverterbecause of the oxide thickness being a couple of nanometers. The nature of breakdown isvery different in thin dielectrics compared to thick dielectrics. It is uncorrelated andrandom in nature. For thin dielectrics the transport of the electrons through it is ballisticin nature, therefore carriers don’t lose energy in the oxide. This kind of transport is alsocompletely dominated by the physics of the contacts (gate and the substrate) and we shallstudy it in details in the following lecture.Fig. 21.3. Regions of applied voltage stress and defect mechanism observed in each regionIt can be seen from Fig. 21.3 that TDDB occurs at a constant stress. At transition,we have HCI. The difference between NBTI and TDDB is one of the voltage regime andthe defect generation region (in the oxide). NBTI is a low voltage phenomenon thatoccurs at the Si-SiO2 interface, TDDB occurs in the bulk of the oxide.Historically scaling of PMOS was less problematic from the point of view ofTDDB. However, as we shall see in later lectures, it became a much more dominantproblem than TDDB in NMOS scaling.Around early 2000’s or so, TDDB became a major issue due to low oxidethickness and reduction of HCI due to the use of Lightly Doped Drain (LDD).101

10221.2.2 Features: TDDB voltage (not field)-acceleratedTDDB is a voltage accelerated process not field accelerated process which is aminor role in TDDB. To estimate the life time of a device, we can do a voltageaccelerated testing as shown inError! Reference source not found. However a bigproblem with such a test is that of the extrapolation of the results for a few samples athigh voltage and small breakdown time to low voltage and long times because of theinherent non-linear nature of the phenomena (as we will see in later lectures) due toFig. 21.4. Nonlinear projection of TDDBpresence of a threshold. Extrapolation for such processes with a threshold is non-linearin nature, which was not understood for a long time (till early 2000s). It is this precisenon-linear projection that allowed the scaling efforts to continue by providing much morelifetime for the devices than is predicted by a linear model.21.2.3 Features: Failure times are Weibull distributedThe process of breakdown in MOSFETs is statistically distributed due to verticalstacks of the defect. Therefore in a collection of devices the time of failure of each deviceis different.102

103Fig. 21.5 Statistical distribution of failure timesEach device in a circuit may have different breakdown times (Error! Referencesource not found.). The net reliability of the circuit is then dependent on the reliability ofthe least reliable device. The range of distribution(Weibull distribution as we shall see inlater lectures) of the failure time is very important because the upper values maybe ordersof magnitude different from the lower values and for reliable operation the lower tailshould be high. It is the lower tail that has to be certified. The average value has nomeaning in TDDB.103

104Fig 21.6 Weibull distribution of failure rates vs. time for failure21.2.4 Features: NMOS vs. PMOS ReliabilityIn 1990’s and early 2000’s there was stalemate in the industry because thereliability models prevalent at that time predicted severely degraded reliabilityperformance for the ITRS predicted scaling for the oxide.104

105Fig. 21.7. ITRS (dotted) v. Reliability predictions (red) for oxide scalingIn Error! Reference source not found., we can see the maximum voltage thatis allowable for safe operation vs. the oxide thickness. The black dotted line shows theindustry consensus about what should be the voltage scaling that would maintain theperformance. However, the predicted models showed that at about year 2000, thisthreshold would be crossed and if the industry roadmaps would be followed, severereliability penalties would be incurred. The other alternative would be to follow the redcurve of reliability prediction for safe voltages, but this would incur performancepenalties due to lower operating voltage.This issue was resolved by understanding the fundamental non-linear physics ofthe dielectric breakdown phenomena. As we can see from Error! Reference source notfound., the NMOS safe operating voltages continued to be higher by almost 1V over theITRS voltage requirements, but PMOS reliability degraded, especially below 2 nm. Thisis due to the phenomena of minority ionization in case of PMOS (absent in NMOS);105

106however, soft breakdown mechanism makes surviving PMOS technology even below2nm that we shall study in following lectures.Fig. 21.8. NMOS v PMOS reliability. PMOS is the problem21.2.5 Features: Soft vs. Hard breakdownThe breakdown need not be catastrophic in nature (molten poly silicon); it can be soft(without melting the poly silicon, only small pinholes) and cause the device to degrade ata much slower rate. This can raise the lifetime of the device by orders of magnitude andis a major reason why devices continue to perform reliably for a long time.106

107Fig. 21.9. Soft vs. Hard breakdownIn Error! Reference source not found., we can see such a distinction betweenthe hard breakdown and soft breakdown. It can be seen that for the hard breakdown, if aconstant current is desired, after breakdown the voltage that should be applied on the gateshould be very small, meaning that for same amount of voltage as before the breakdown,we would expect a lot more current. However, we can see that for soft breakdown thisproblem is not so drastic and the device can maintain the constant current characteristicseven after the breakdown without much difference in the gate voltage as shown in Error!Reference source not found. Therefore the current will not increase much under theconstant voltage regime.107

108Fig. 21.10. Increase in leakage current induced by soft breakdown21.3 Physical characterization of breakdown spotTDDB can cause significant damage to the device. It can melt the silicon andmake it go through the oxide into the poly silicon gate and eventually it reaches to sourcedrain contact. Following figures describes various breakdown spots.108

110silicide to be spread out which is called as Dielectric Breakdown Induced Migration(DBIM) as shown Error! Reference source not found.Fig. 21.14. An example of Dielectric Breakdown Induced Epitaxy (DBIE) ofMOSFETs before breakdownIn this case, DBIE is still in progress. Thus, the dielectric becomes short whichmeans the defects are forming by the breakdown process. Here, the device may still befunctional as shown Error! Reference source not found.110

111Fig. 21.15. An example of Dielectric Breakdown Induced Epitaxy (DBIE) ofMOSFETs after breakdown and re-crystallizedIn this stage, oxide layer is just broken up and then, poly gate region is recrystallized by the heat from the breakdown process. As we saw above figures, thedielectric breakdown process causes several negative effects on the devices and theprocess damages the device entirely as shown Error! Reference source not found.21.4 Time-dependent defect generationA very important consideration in all our reliability issues till now has been thetime exponent for the defect generation. We need to understand how it changes withchange in bias and temperature.Also, the Si-O bonds are distributed in energy. In HCI, they do not all break at the sametime. In TDDB due to the huge amount of energy involved in the process of defectgeneration, all the bonds can break (we will see the mechanism in details in laterlectures). Thus the universality of the time exponent is expected to be different.21.5 ConclusionsWe saw that the dielectric breakdown has a long history with broad implicationsfor technology. We also saw that the physics of the breakdown of thin and thickdielectrics in very different. In thin dielectrics, understanding of the statistical distributionof the failure times is very essential. Also, measurement of TDDB and extrapolation isdifficult due to non-linear nature of the phenomenon; therefore a theory of dielectricbreakdown is essential along with accurate measurement techniques.111

Corona discharge, arc discharge, discharge in gas tube are examples of dielectric breakdown which are reversible, that is, the dielectric is restored to its original state once the stress voltage is removed and no permanent damage is expected (except perhaps at the electrodes). Nowadays, these processes arewidely used in plasma display .

【E-book】Texts & Questions of 50 Lectures for TOEFL .

A Brief History of the Internet - MIT

Lecture 1: What is Machine Learning?

Committee on Energy and Commerce U.S. House of

‘MANAGING SELF: MANTRA FOR HOLISTIC LIVING’