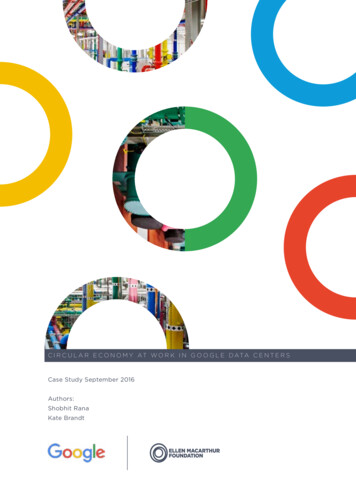 INTRODUCTIONGlobal business has a key role to play in moving from an economy based upona ‘take-make-dispose’ model to one based on a restorative and regenerativesystem. The linear model is reaching its physical limits: Recent data shows thatin 2015, global demand for resources was equivalent to 1.5 times what Earth cansupport in one year.At Google we believe in the democratizing effect of putting knowledge in thehands of everyone, so we are organizing the world’s information and makingit universally accessible. We are committed to doing that in a way that has apositive impact on the planet.A circular economy is restorative and regenerative by design, and aims to keepproducts, components, and materials at their highest utility and value at all times.Key elements of the circular economy model optimise resources by circulatingproducts, components and materials in use through different loops of the usecycle:REFURBISH /M A I N TA I N /REM A N U FAC T U R EPROLONGREUSE /REDISTRIBUTER E C YC L EGoogle’s global partnership with the Ellen MacArthur Foundation (EMF) issupporting Google to build on existing practices and embed circular economicprinciples into the fabric of Google’s infrastructure, operations and culture.EMF works through education, business innovation and analysis to drive theacceleration of the transition to a circular economy.There is no better example of how Google is implementing circular economystrategy at scale than how we manage the hardware inside our data centers. Thiscase study reviews the practices we have implemented through maintenance,refurbishment/remanufacturing, redistribution/secondary market sales, andrecycling. These practices combined with Google’s circular approach tooptimizing end of life of servers based on Total Cost of Ownership (TCO)principles have resulted in hundreds of millions per year in cost avoidance.CIRCULAR ECONOMY IN A GOOGLE DATA CENTER 1

BACKGROUNDGoogle is always pushing for the most energy efficient, highest performingcompute in every piece of hardware and square foot of our facilities. Ourhigh performance computing is the result of optimization throughout ourentire operation from the design of our servers to utilizing machine learningto squeezing the greatest efficiency out of our building systems. Googleachieves high utilization of resources by sharing machines through computeand storage shared services that serve all product areas (as opposed to eachproduct area having its own dedicated machines). One such shared service forsharing compute capacity is Borg, an architecture for scheduling and managingapplications across all Google data centers.Much of our infrastructure is custom designed, from our own high voltagesubstations, to the on-site electrical distribution systems, to the proprietarycooling systems - all working in conjunction and optimized to provide the highestperformance and lowest total cost of ownership computing infrastructure, savingGoogle over 1 billion in our operations through energy efficiency alone.Google servers don’t include unnecessary components such as video cards,chipsets, or peripheral connectors, which can introduce vulnerabilities. Serverresources are dynamically allocated, allowing for flexibility in growth and theability to adapt quickly and efficiently, adding or reallocating resources basedon customer demand. Google optimizes server end-of-life based on TCO ratherthan industry standards for accounting life, which allows us to redeploy hardwarebased on remaining economic value rather than accounting book value. Google’sIP data network consists of our own fiber, peering, and undersea cables. Thisallows us to deliver highly available and low latency services across the globebut it also means we can respond faster to demand, providing capacity whenneeded.CIRCULAR ECONOMY IN A GOOGLE DATA CENTER 2

Multiple programs and processes within Google’s Data Center Operations andSupply Chain groups apply key circular economy strategies including:M A I N TA I N / P R O L O N G :Google’s repairs process at the data centersenables longer life expectancy of theservers. As servers fail and fall into repairs,defective parts are replaced by refurbishedparts, which enables longer usage of parts.Hard drives/ disks and memory modules(DIMMs) are the most commonly repaired(replaced) components. The repairs programreplaces failed components using a mix ofnew and refurbished parts.In 2015, 75% of components consumed in thespares program were refurbished inventory.R E F U R B I S H / R E M A N U FAC T U R E :Once servers from data centers aredecommissioned, they are sent back to thecentral hub. At the hub servers aredismantled and de-kitted to their usablecomponents (CPU, motherboard, Flashdevices, hard disks, memory modules andother components). After quality inspection,components are stored to be reused asrefurbished inventory.Google custom builds its own servers for data centers through a program calledthe Servers Build program. Refurbished parts (mentioned above) are used tobuild remanufactured servers and are then deployed back into data centers. InGoogle data centers, there is a mix of the servers running the latest technologyplatforms and also older platforms. Once components are in inventory, there isno distinction made between refurbished and new inventory, both are consideredequivalent.CIRCULAR ECONOMY IN A GOOGLE DATA CENTER 4

In 2015, 19% of servers Google deployed were remanufactured machines.There are two other programs where Google uses refurbished parts:Server UpgradesThe Server Upgrades program is a process by which the useful life of servers canbe prolonged by upgrading aging (not effective) technology (components) in theservers. Primary components that are upgraded in servers are hard disks/drives,memory modules (DIMMs) and flash devices (SSD). Components that come outof the servers due to the upgrade are also sent back to the warehouse and arereused by putting them back into inventory.Spares and RepairsThe Spares and Repairs program is a process for repairing of servers andcomponents as they fail in the data center.In 2015, 52% of components consumed in Machine Upgrades program wererefurbished inventory.REUSE / REDISTRIBUTE:Google redistributes any excess componentinventory as determined by quarterly E&Oprocess internally. After utilizing all internalavenues Google goes through a rigorousprocess to ensure no proprietary Googletechnology resides on the componentsbefore selling on the secondary market.Google works in close collaboration withselected remarketing partners to look atvarious market factors for resale. There arethree primary components that are resold onthe secondary market: memory modules,hard drives and OEM Networking equipment.In 2015, Google resold nearly 2 million units into the secondary market for reuseby other organizations.CIRCULAR ECONOMY IN A GOOGLE DATA CENTER 5

R EC YC L E :Google maximizes the recycling of all datacenter material, including the electronicequipment that leaves our data centers. Harddrives and storage tapes that cannot beresold are crushed and then shredded. Thesecrushed materials along with plastics andmetals from other electronic waste are thencombined and sent to a recycling partner forsecure processing and recycling intoreusable materials.CIRCULAR ECONOMY IN A GOOGLE DATA CENTER 6

CONCLUSIONGoogle is practicing the concepts of circular economy in our servers supply chain andis unlocking the value that comes from demonstrating the circular economy at scale.As part of the Google-wide circular economy program we will continue to exploreother opportunities throughout data center operations. It is Google’s belief that doingso will yield additional value for business, partners and users.CIRCULAR ECONOMY IN A GOOGLE DATA CENTER 8

Google is practicing the concepts of circular economy in our servers supply chain and is unlocking the value that comes from demonstrating the circular economy at scale. As part of the Google-wide circular economy program we will continue to explore other opportunities throughout data center operations. It is Google's belief that doing

Business Models for the Circular Economy

The Circular Economy: Barriers and Opportunities for SMEs

on circular economy in the automotive industries

The role of Landscape Architects in Circular Economy and .

Analysis of Rectangular and Circular Waveguides