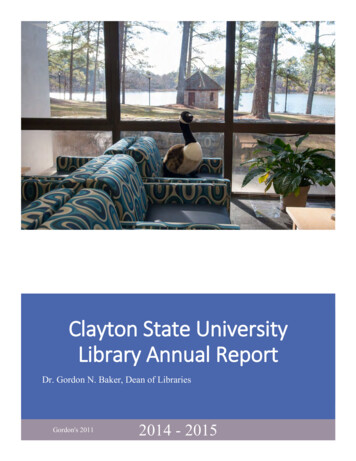 Clayton State University Library Annual Report 2014-2015Dear Reader:The new fiscal year saw the entire Library staff planning for the relocation of the Library’scollections to their new home on the completed renovated lower level. A date was set for thismove, but due to scheduling conflicts and other issues, it finally occurred in November. Staffwas given training in the operation of the new high density shelving.While the collections were being rehoused, members of the staff also faced being relocated.Collection & Resource Management, after more than a year in the L200, the Library instructionclassroom, was moved to its new space on the lower level. The Circulation area staff was movedto their new space on the lower level. The high density shelving used for reserves andaudiovisual collection had been moved earlier but were fully installed and functional.Members of the Electronic Resources & Services, Reference & Instruction, and Assessment &Marketing were also relocated to spaces on the lower level. These moves put the majority of theLibrary staff in space less than half of what they had occupied previously.The Library Administration and Archives were relocated to the L200, Library instructionclassroom. The majority of the Archives’ collection was placed in storage at the GeorgiaArchives, but several collections were moved into L200.While the renovation occupied much of our time during the year, the departments did functionquite well in their new spaces. Here is a brief tidbit from each department. You will find eachdepartment’s complete report in the pages of this report.AdministrativeLongtime Executive Assistant, Jennifer Duke resigned in July 2014 to accept a position as MediaSpecialist at Howard Middle School in Macon. Since arriving at Clayton State, Jennifer hadearned both her Master of Library and Information Science and Specialist in InstructionalTechnology degrees. Acquisitions Assistant Heidi Benford accepted the position ofAdministrative Assistant to the Dean of Libraries and began working August 2014. Ms. Benfordhas been a valued staff member for many years.ArchivesThis year the CSU Archives was in a state of preparation and transition for the move totemporary quarters and off-site storage. An inventory of all the collections was created. Theintern from Valdosta and the Archivist worked on this list. Collections were packed in archivalboxes, and all boxes were labeled with archives labels and moving labels. Collections andsupply items were selected for off-site storage.2

Three collections were moved to the temporary space: Athletics, Library, and Archives. Thesecollections provided projects and work for the Archivist and students. The Athletics Collectionwas selected because of the desire of the Athletics Department to have a working and completearchival record of the students, staff, and sports in the Archives. The Library and ArchivesCollections were selected to provide small projects for interns.Assessment & MarketingFirst and foremost, all SACS narratives were submitted on time and resulted in zerorecommendations from the On-Site Review Committee. The Assessment & Marketing Librarian(AML) also assisted the University Archivist with related SACS narratives.A new online, self-scored quiz for CSU 1022 classes was developed. This quiz has been addedto the CSU 1022 LibGuide and could be used by any student for any course. Over 100 studentstook the quiz.The AML worked with the Heads of Instruction, Collection Management, and ElectronicResources and Services to plan for data collection to respond to the revised Academic LibrariesSurvey administered by IPEDS. This new data collection method poses a number of challengesand the AML has been following listservs and communicating with IPEDS staff to be sure weare in compliance.In order to achieve a positive and consistent image within the Library, the AML drafted asignage and posting policy for the Library to follow. The AML is awaiting feedback fromLibrary administration and university marketing staff before proposing a final draft. Theadoption and implementation of this policy will positively impact the Library and our patron’sexperience. Every interaction a patron has with the library, whether it is face to face, web-based,or viewing a sign, reflects on the Library itself and makes a statement about who we are and howwe view our patrons.The AM Department continues to seek out new ways to partner with other Universitydepartments. In 2014, the Library had a booth at the CARE Fair, presented a session at thefreshman orientation session, and also had a booth at the Fall Department Day. The addition ofan official tablecloth enhanced the Library’s presence at the Department Day. TRUST(Transforming Relations Using Student Thinkers), a student group sponsored by Dr. SusanMcFarlane-Alvarez partnered with the Library to make promotional videos for the Created Equalevents. This was so successful that the Library signed up to partner with the advanced publicrelations class in 2014 for a semester long project to promote other aspects of the Library. It isimportant to continue to partner with student groups as well as University departments to takeadvantage of word of mouth marketing.Collection & Resource ManagementPrimary functions of the Collection and Resource Management (CRM) include: acquisitions;cataloging; course reserves; database management; electronic resource management, electronicservices; interlibrary loan; library equipment management and maintenance, materials processingand repair; periodicals; Voyager system administration; web page management.3

Collection Management experienced significant staffing changes during 2014 -2015. AnElectronic Resources Librarian position was added to the Electronic Resources and ServicesUnit. The Acquisitions Assistant and Cataloging Assistant positions were combined increasingthe workload for the remaining position. The Periodical Assistant’s position was upgraded to afaculty position becoming the Serials Librarian.During 2014-2015 Collection and Resource Management librarians were called upon to play alarger role in reference and instruction services. This was due, at least in part, to staffingchanges during 2014. Collection Management librarians accepted this challenge and accustomedthemselves well in this area.Another significant change was the inclusion of the Circulation Department under the leadershipof the Head of CRM.Finally the most important event for the Collection and Resource Management Department in2014 was the relocation to permanent space in the newly renovated lower level of thelibrary. With this move all Collection Management staff members share the same office spacefor the first time.Reference & Instructional ServicesThe Public Services Department began the year with a loss of staff with the evolution of theElectronic and Resources and Services Unit moving to Collection and Resources ManagementDepartment. The staff included two librarians, one staff member, and the Department Chair.With the assistance of the Assessment & Marketing Librarian and members from the Collectionand Resources Management Department all instruction sessions were met and most hours werecovered at the Reference Desk.The weeding of the reference and circulating collections was completed. The Public Servicesstaff began to prepare for the upcoming relocation of the Department due to the renovations ofthe Library. A search for a new weekend services/public services librarian was begun in thespring. In June, Department Chair, Katherine Quinnell announced her intentions to leave as ofJune 30. In July a new organizational chart was revealed with the Department being renamed“Reference and Instructional Services Department.” This was due to the relocation of theCirculation Unit to the Collection and Resources Management Department. A second search fora new Department Head was launched. Thomas Jackson, Jr. was hired as the new WeekendServices/Public Services Librarian and Joan Taylor was promoted to the position of DepartmentHead. With Joan’s promotion a search was launched to fill her position as Public ServicesLibrarian. David Greenebaum was eventually hired for this position.4

Clayton State University Library Administrative TeamDr. Gordon N. Baker began at Clayton State University in 1979 when itwas Clayton Junior College. Dr. Baker was the evening and weekendcoordinator for 25 years before joining the staff fulltime in 2004 as Head ofPublic Services. In 2005, he became the Interim Director of the Library. In2006, he was named Director of Libraries. In 2009, Dr. Baker became Deanof Libraries. He holds an Associates of Arts from Clayton Junior College(now Clayton State University); a bachelor’s degree in ElementaryEducation with a minor in Library Science from Valdosta State University;both a Master’s degree and Specialist’s degree in Library Services fromAtlanta University (now Clark Atlanta University); and Doctor ofEducational Leadership from Nova Southeastern University.Cathy Jeffrey began at CSU in 1987 as a part-time cataloger. In1996, her status was changed to full-time. In 2005 she became theHead of Technical Services. In 2004, she was promoted to theHead of Techical Services. In 2010, she became the AssociateDean of the Library and Head of Collection and ResourceManagement. She now supervises the largest department of theLibrary.Cathy holds an Associate of Arts from Reinhardt College (nowUniversity), a Bachelor of Arts in English from the University ofGeorgia and her MSLS from Florida State University.Joan Taylor joined the Staff at Clayton State in 2003 as a referenceand instruction librarian. In 2014, she became the Head ofReference and Instructional Services. Prior to coming to CSU, Joanwas a reference librarian at the Robert W. Woodruff Library at theAtlanta University Center. She holds a Bachelor’s Degree from theUniversity of South Florida and a MLIS from Clark AtlantaUniversity.6

Adam Kubik joined the CSU Library staff in April 2005 as the CatalogLibrarian. In March 2011 he was named the Head of MonographicCataloging. Prior to coming to CSU, Adam worked at Bucknell University inLewisburg, PA. Adam received his MLS from the State University of NewYork at Buffalo in 2004.Kara Mullen joined the staff of Clayton State University in 2000 asthe Administrative Assistant to the Director of the Library. In 2010she was named the first Electronic Resources and Services Librarian.In 2013 she was promoted to the position of Head of the newlyestablished Electronic Resources and Services Department. Karaholds a Bachelor’s in English from Georgia State University inAtlanta and an MLIS from Valdosta State University in Valdosta,GA.Rosemary Fischer joined the Clayton State Library staff as theUniversity’s first Archivist in 2004. As she likes to say, she took a roomwith a broken desk and two bookcases and turned it into a first-rateArchives. In addition to her archival responsibilities, Rosemary alsoperformed Public Services functions for her first few years. In 2010, shebecame the full-time University Archivist. Rosemary holds a Bachelor’sdegree in English from the University of Washington in Seattle and anMLIS from the University of South Carolina in Columbia.7

Jennifer Duke joined staff at Clayton as the ReservesAssistant in 2006. She had previous library experience fromthe Henry County Library System, McDonough; the ClaytonCounty Library System, Jonesboro; the Valdosta StateUniversity Library, Valdosta; and the Brooks County Library,Quitman. She became the Executive Assistant to the Dean ofthe Library in 2012. Jennifer holds a Bachelor of Art inEnglish Literature from Excelsior College; an MLIS fromValdosta State University, Valdosta; and an EducationSpecialists in Instructional Technology from Valdosta StateUniversity. In July 2014, Jennifer left Clayton State to become the media specialist atHoward Middle School in Macon, GA.Heidi Benford has been a member of the staff at ClaytonState for many years. She has served in numerouspositions include Reserves Assistant and AcquisitionsAssistant. In August of this year, with the departure ofJennifer Duke, Heidi became the Administrative Assistant toDean of Libraries. Heidi holds a bachelor’s degree fromClark8