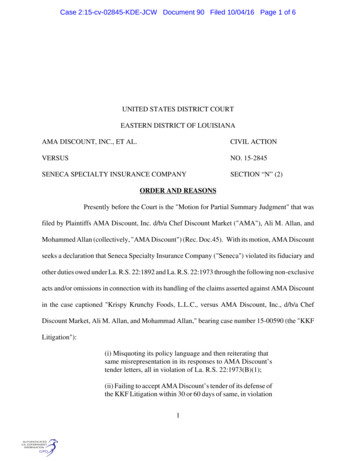 Case 2:15-cv-02845-KDE-JCW Document 90 Filed 10/04/16 Page 2 of 6of La. R.S. 22:1892(A)(1) and La. R.S. 22:1973(A) and(B)(5);(iii) Failing to make a reasonable effort to settle the claimsasserted against AMA Discount in the KKF Litigation, inviolation of La. R.S. 22:1973(A) as interpreted by theLouisiana Supreme Court in Kelly v. State Farm Fire & Cas.Co., 169 So. 3d 328, 341 (La. 05/05/15); and(iv) Baselessly citing policy exclusions that are clearlyinapplicable while continuing to ignore the Court’s Order thatAMA Discount is entitled to a defense under the SenecaPolicy, again in violation of La. R.S. 22:1973(B)(1) and incontinuing violation of La. R.S. 1892(A)(1) and La. R.S.22:1973(B) (5).The Louisiana "bad faith" insurance statutes that are the subject of AMA Discount'smotion provide, in pertinent part:La. R.S. 22:1973 (Formerly cited as La. R.S. 22:1220)Good faith duty; claims settlement practices; cause of action;penaltiesA. An insurer, including but not limited to a foreign line andsurplus line insurer, owes to his insured a duty of good faith andfair dealing. The insurer has an affirmative duty to adjust claimsfairly and promptly and to make a reasonable effort to settleclaims with the insured or the claimant, or both. Any insurer whobreaches these duties shall be liable for any damages sustained asa result of the breach.B. Any one of the following acts, if knowingly committed orperformed by an insurer, constitutes a breach of the insurer'sduties imposed in Subsection A of this Section:(1) Misrepresenting pertinent facts or insurance policy provisionsrelating to any coverages at issue.(2) Failing to pay a settlement within thirty days after anagreement is reduced to writing.2

Case 2:15-cv-02845-KDE-JCW Document 90 Filed 10/04/16 Page 3 of 6(3) Denying coverage or attempting to settle a claim on the basisof an application which the insurer knows was altered withoutnotice to, or knowledge or consent of, the insured.(4) Misleading a claimant as to the applicable prescriptive period.(5) Failing to pay the amount of any claim due any personinsured by the contract within sixty days after receipt ofsatisfactory proof of loss from the claimant when such failure isarbitrary, capricious, or without probable cause.(6) Failing to pay claims pursuant to R.S. 22:1893 when suchfailure is arbitrary, capricious, or without probable cause.C. In addition to any general or special damages to which aclaimant is entitled for breach of the imposed duty, the claimantmay be awarded penalties assessed against the insurer in anamount not to exceed two times the damages sustained or fivethousand dollars, whichever is greater. Such penalties, ifawarded, shall not be used by the insurer in computing either pastor prospective loss experience for the purpose of setting rates ormaking rate filings.D. The provisions of this Section shall not be applicable to claimsmade under health and accident insurance policies.E. Repealed by Acts 1997, No. 949, § 2.F. The Insurance Guaranty Association Fund, as provided in R.S.22:2051 et seq., shall not be liable for any special damagesawarded under the provisions of this Section.See LSA-R.S. 22:1973.La. R.S. 22:1892 (Formerly cited as La. R.S. 22:658)Payment and adjustment of claims, policies other than life and health andaccident; personal vehicle damage claims; extension of time to respond toclaims during emergency or disaster; penalties; arson-related claimssuspensionA. (1) All insurers issuing any type of contract, other than thosespecified in R.S. 22:1811, 1821, and Chapter 10 of Title 23 of theLouisiana Revised Statutes of 1950, shall pay the amount of any3

Case 2:15-cv-02845-KDE-JCW Document 90 Filed 10/04/16 Page 4 of 6claim due any insured within thirty days after receipt ofsatisfactory proofs of loss from the insured or any party ininterest. The insurer shall notify the insurance producer of recordof all such payments for property damage claims made inaccordance with this Paragraph.(2) All insurers issuing any type of contract, other than thosespecified in R.S. 22:1811, R.S. 22:1821, and Chapter 10 of Title23 of the Louisiana Revised Statutes of 1950, shall pay theamount of any third party property damage claim and of anyreasonable medical expenses claim due any bona fide third partyclaimant within thirty days after written agreement of settlementof the claim from any third party claimant.(3) Except in the case of catastrophic loss, the insurer shallinitiate loss adjustment of a property damage claim and of a claimfor reasonable medical expenses within fourteen days afternotification of loss by the claimant. In the case of catastrophicloss, the insurer shall initiate loss adjustment of a propertydamage claim within thirty days after notification of loss by theclaimant except that the commissioner may promulgate a rule forextending the time period for initiating a loss adjustment fordamages arising from a presidentially declared emergency ordisaster or a gubernatorially declared emergency or disaster up toan additional thirty days. Thereafter, only one additionalextension of the period of time for initiating a loss adjustmentmay be allowed and must be approved by the Senate Committeeon Insurance and the House Committee on Insurance, votingseparately. Failure to comply with the provisions of thisParagraph shall subject the insurer to the penalties provided inR.S. 22:1973.(4) All insurers shall make a written offer to settle any propertydamage claim, including a third-party claim, within thirty daysafter receipt of satisfactory proofs of loss of that claim.B. (1) Failure to make such payment within thirty days afterreceipt of such satisfactory written proofs and demand therefor orfailure to make a written offer to settle any property damageclaim, including a third-party claim, within thirty days afterreceipt of satisfactory proofs of loss of that claim, as provided inParagraphs (A)(1) and (4) of this Section, respectively, or failureto make such payment within thirty days after written agreementor settlement as provided in Paragraph (A)(2) of this Section4

Case 2:15-cv-02845-KDE-JCW Document 90 Filed 10/04/16 Page 5 of 6when such failure is found to be arbitrary, capricious, or withoutprobable cause, shall subject the insurer to a penalty, in additionto the amount of the loss, of fifty percent damages on the amountfound to be due from the insurer to the insured, or one thousanddollars, whichever is greater, payable to the insured, or to any ofsaid employees, or in the event a partial payment or tender hasbeen made, fifty percent of the difference between the amountpaid or tendered and the amount found to be due as well asreasonable attorney fees and costs. Such penalties, if awarded,shall not be used by the insurer in computing either past orprospective loss experience for the purpose of setting rates ormaking rate filings.****See LSA-R.S. 22:1892.AMA Discount's contention that Seneca violated La R.S. 22:1973 by"misrepresenting pertinent facts or insurance policy provisions relating to any coverages at issue"by "misquoting its policy language and then reiterating that same misrepresentation in its responsesto AMA Discount's tender letters" is particularly troublesome to the Court given that the assertionis premised upon Seneca's apparently purposeful omission (in its May 5, 2015 denial letter) oflanguage found in Exclusion (i) "Infringement of Copyright, Patent, Trademark, or Trade Secret"that is favorable to AMA Discount. See Rec. Doc. 45-1 at pages 2-3 of 15. Nevertheless, certainof the declarations sought with AMA Discount's motion seemingly rest upon disputed factualdeterminations and assessments of witness credibility that remain reserved to the trier of fact – ajury – in this matter. Given that, and the issues left undecided by the Order and Reasons (Rec. Doc.84) denying Seneca's "Motion for New Trial" (Rec. Doc. 23), and denying in part and granting inpart AMA Discount's "Motion to Strike Certain Defenses" (Rec Doc. 26), the Court, having5

Case 2:15-cv-02845-KDE-JCW Document 90 Filed 10/04/16 Page 6 of 6carefully considered the parties' submissions and the authorities cited therein, is not presentlypersuaded that AMA Discount is entitled to the summary declaratory relief sought by the instantmotion. Accordingly, for these reasons, IT IS ORDERED that AMA's motion for partial summaryjudgment (Rec. Doc. 45) is DENIED.New Orleans, Louisiana, this 4th day of October 2016.KURT D. ENGELHARDTUnited States District JudgeClerk to Copy:U.S. Magistrate Judge Joseph C. Wilkinson, Jr.6

Reasons for the Seasons - mrzitkasclassroom.weebly