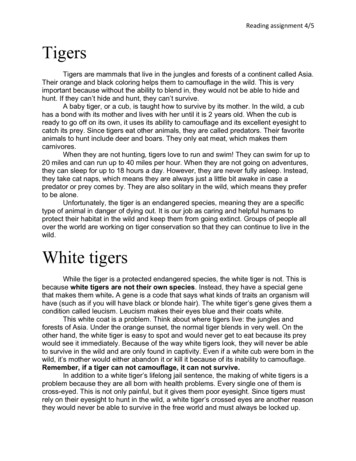 Reading assignment 4/5TigersTigers are mammals that live in the jungles and forests of a continent called Asia.Their orange and black coloring helps them to camouflage in the wild. This is veryimportant because without the ability to blend in, they would not be able to hide andhunt. If they can’t hide and hunt, they can’t survive.A baby tiger, or a cub, is taught how to survive by its mother. In the wild, a cubhas a bond with its mother and lives with her until it is 2 years old. When the cub isready to go off on its own, it uses its ability to camouflage and its excellent eyesight tocatch its prey. Since tigers eat other animals, they are called predators. Their favoriteanimals to hunt include deer and boars. They only eat meat, which makes themcarnivores.When they are not hunting, tigers love to run and swim! They can swim for up to20 miles and can run up to 40 miles per hour. When they are not going on adventures,they can sleep for up to 18 hours a day. However, they are never fully asleep. Instead,they take cat naps, which means they are always just a little bit awake in case apredator or prey comes by. They are also solitary in the wild, which means they preferto be alone.Unfortunately, the tiger is an endangered species, meaning they are a specifictype of animal in danger of dying out. It is our job as caring and helpful humans toprotect their habitat in the wild and keep them from going extinct. Groups of people allover the world are working on tiger conservation so that they can continue to live in thewild.White tigersWhile the tiger is a protected endangered species, the white tiger is not. This isbecause white tigers are not their own species. Instead, they have a special genethat makes them white. A gene is a code that says what kinds of traits an organism willhave (such as if you will have black or blonde hair). The white tiger’s gene gives them acondition called leucism. Leucism makes their eyes blue and their coats white.This white coat is a problem. Think about where tigers live: the jungles andforests of Asia. Under the orange sunset, the normal tiger blends in very well. On theother hand, the white tiger is easy to spot and would never get to eat because its preywould see it immediately. Because of the way white tigers look, they will never be ableto survive in the wild and are only found in captivity. Even if a white cub were born in thewild, it’s mother would either abandon it or kill it because of its inability to camouflage.Remember, if a tiger can not camouflage, it can not survive.In addition to a white tiger’s lifelong jail sentence, the making of white tigers is aproblem because they are all born with health problems. Every single one of them iscross-eyed. This is not only painful, but it gives them poor eyesight. Since tigers mustrely on their eyesight to hunt in the wild, a white tiger’s crossed eyes are another reasonthey would never be able to survive in the free world and must always be locked up.

Reading assignment 4/5You’re probably wondering why white tigers exist if they can not survive in thewild. The answer is that humans create them because people think they are beautifuland will pay money to see them.It has been estimated that only 1 out of 30 white tigers is born perfect. The restare thrown away. In the picture below is a “throwaway” white tiger named Kenny. Hewas purposefully made by humans and is an example of the health problems whitetigers can face. Kenny’s owner decided he was not beautiful enough. He was sent to asanctuary, or a safe place, where he died at the age of 10 from skin cancer. Just likehumans with very light skin, tigers with white fur are more sensitive to the sun and candevelop skin problems more easily.AbuseSadly, because people like the way white tigers look, they are often abused. Many whitetigers are created for zoos just so the zoos can make money. Another example of white tigerabuse is cub petting. Cub petting is when people play with baby tigers as if they were stuffedanimals.The way these cubs live is unnatural. Instead of staying with their mothers for two yearsand exploring the world around them, cubs used for petting are ripped from their mothers atbirth. Since they are raised by humans, they imprint on them and don’t realize they were meantto be raised by tigers.Throughout the day, cubs are constantly woken up to be touched and tugged on andhardly get any sleep. They don’t get the alone time that they prefer in the wild. On top of that,their owners bottle feed them to keep them small instead of giving them the proper diet of acarnivore. When the cubs become too big, their owners no longer have any use for them. Theyare dropped off at horrible roadside zoos where they are poorly cared for. Sometimes, they arekilled.People who offer cub petting often say they are doing it for “conservation” purposes.This is a lie. Conservation is about taking care of the animals in the wild. White tigers donot live in the wild and they are not endangered.

Vocabulary activity 4/5Vocabulary1.Camouflage: an animal’s natural color or form that blends in withits surroundings2.3.4.Captivity: when an animal is held inside a cage or prisonCarnivore: an animal that eats meatConservation: protecting the natural world, including its animalsand their habitatsContinent: one of 7 large bodies of land in the world6. Endangered: at risk of dying out7. Extinct: a species of animal that no longer lives8. Gene: a code that decides the traits of an animal when it is born9. Habitat: the place where a plant or animal naturally lives10. Imprint: when a young animal is raised by humans and thinks they are5.its parents11.Leucism: the condition that gives a white tiger its white coat and blueeyes12.Mammal: a warm-blooded animal that feeds on its mother’s milk as ababyOrganism: a living thing14. Predator: an animal that hunts and eats other animals15. Prey: an animal that is eaten by another animal16. Species: a specific type of animal13.

Vocabulary activity 4/5Vocabulary: Match the word to its definition.1.Camouflage2.Conservationa. An animal that hunts and eats other animalsb. At risk of dying outc.The place where a plant or animal naturally lives3.Endangered4.Extinct5.Speciesf.6.Predatorg. A species of animal that no longer lives7.Preyh. A warm-blooded animal that feeds on itsmother’s milk as a Organism13.Habitat14.Mammal15.Imprint16.Leucismd. An animal that eats meate. An animal that is eaten by another animalA living thingj.An animal’s natural color or form that blends inwith its surroundingsWhen an animal is held inside a cage or prisonk.A specific type of animall.A code that decides the traits of an animal whenit is born (Hint: blue eyes)m. One of 7 large bodies of land in the world (Hint:We live in North America!)n. Protecting the natural world, including itsanimals and their habitatso. When a young animal is raised by humans &thinks they are its parents (Hint: This happenswhen cubs are taken from their real mothers forcub petting.)p. The condition that gives a white tiger its whitecoat and blue eyes

Coloring sheet 4/5CamouflageDirections: Color in the white tiger so he can better blend in with his surroundings.

Math worksheet 4/5Tiger MathDirections: Answer the following questions. Use the space at the bottom to showyour work.1. Around 7,000 tigers live in captivity in the USA. Around3,890 tigers are left in the wild. Approximately how many moretigers live in captivity than in the wild? Round to the nearestthousand.2. Only 1 out of 30 white tigers is “perfect”. The other 29 arediscarded. If 150 white tigers are born (or 5 groups of 30), howmany are discarded? How many are kept?Discarded:Kept:3. Tigers can weigh up to 700 pounds. Divide that by yourweight to see how many times bigger a tiger is than you:4. Tigers can sleep for up to 18 hours a day. What fraction oftheir day is that? Write your answer as a fraction and a decimal.

Quiz 4/5QUIZDirections: Answer the questions below.a.b.c.d.1. Where do white tigers live?The snowAsiaCaptivityAfrica2. Circle all the reasons why white tigers can not be released into the wild:a. They do not know how to hunt because they were born in captivityb. They prefer to be in cagesc. There is not enough space in the wildd. They can not camouflage and would not survive3. Why is it a bad idea to pet or take pictures with a cub?a. The cub was stolen from its mother and familyb. Tigers are dangerous, wild animalsc. It’s abusive to the cubsd. All of the above4. Which one of the following is an endangered species?a. Dogb. Tigerc. Cockroachd. White tiger5. What is the purpose of conservation?a. To make moneyb. To protect animals that live in cagesc. To protect a species in the wildd. To get rid of an animal6.Why is making a white tiger a bad idea?

Geography worksheet 4/5Tiger GeographyInstructions: Answer the questions using this list of continents:Antarctica, Asia, Africa, North America, South America, Europe, Australia1.On which continent do tigers live?2.3.4.Which ocean is to the east of theirhome?5.6.7.Which ocean is south of their home?

Teacher key 4/5Teacher key:Reading assignment/lesson points: White tigers are not an endangered species.There is no conservation purpose to creating an animal that may only survive incaptivity.It is unfair to make white tigers because they are born sick and will live in cages forever.Wild animals belong in their natural habitats.Playing with or taking photos with cubs is not good for the animals. It is also verydangerous for the people.Activity Answer Key:Quiz:1- C2- A & D3- D4- B5- C6- Making a white tiger is a bad idea because every white tiger is guaranteed to havehealth problems and it is unfair to intentionally breed an unhealthy animal. Also, theycan not be released into the wild because of their imprinting on humans, inability tocamouflage, and lack of training from their mothers on how to hunt.Vocab:1.2.3.4.5.6.7.8.I (i)NBGKAEJMath:1.2.3.4.3,000145 discarded; 5 keptVaries; should be around 718/24; 0.759.10.11.12.13.14.15.16.MDLFCHOP

because white tigers are not their own species. Instead, they have a special gene that makes them white. A gene is a code that says what kinds of traits an organism will have (such as if you will have black or blonde hair). The white tiger’s gene gives them a condition called leucism. Leucism makes their eyes blue and their coats white.File Size: 3MB

The Genetic Basis of White Tigers - University of

Long ago in China, the Jade Emperor, the almighty Chinese God,