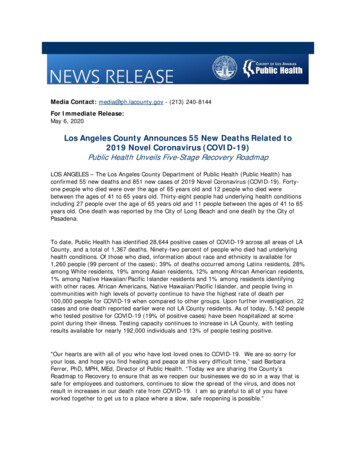 Media Contact: [email protected] - (213) 240-8144For Immediate Release:May 6, 2020Los Angeles County Announces 55 New Deaths Related to2019 Novel Coronavirus (COVID-19)Public Health Unveils Five-Stage Recovery RoadmapLOS ANGELES – The Los Angeles County Department of Public Health (Public Health) hasconfirmed 55 new deaths and 851 new cases of 2019 Novel Coronavirus (COVID-19). Fortyone people who died were over the age of 65 years old and 12 people who died werebetween the ages of 41 to 65 years old. Thirty-eight people had underlying health conditionsincluding 27 people over the age of 65 years old and 11 people between the ages of 41 to 65years old. One death was reported by the City of Long Beach and one death by the City ofPasadena.To date, Public Health has identified 28,644 positive cases of COVID-19 across all areas of LACounty, and a total of 1,367 deaths. Ninety-two percent of people who died had underlyinghealth conditions. Of those who died, information about race and ethnicity is available for1,260 people (99 percent of the cases); 39% of deaths occurred among Latinx residents, 28%among White residents, 19% among Asian residents, 12% among African American residents,1% among Native Hawaiian/Pacific Islander residents and 1% among residents identifyingwith other races. African Americans, Native Hawaiian/Pacific Islander, and people living incommunities with high levels of poverty continue to have the highest rate of death per100,000 people for COVID-19 when compared to other groups. Upon further investigation, 22cases and one death reported earlier were not LA County residents. As of today, 5,142 peoplewho tested positive for COVID-19 (19% of positive cases) have been hospitalized at somepoint during their illness. Testing capacity continues to increase in LA County, with testingresults available for nearly 192,000 individuals and 13% of people testing positive."Our hearts are with all of you who have lost loved ones to COVID-19. We are so sorry foryour loss, and hope you find healing and peace at this very difficult time,” said BarbaraFerrer, PhD, MPH, MEd, Director of Public Health. “Today we are sharing the County’sRoadmap to Recovery to ensure that as we reopen our businesses we do so in a way that issafe for employees and customers, continues to slow the spread of the virus, and does notresult in increases in our death rate from COVID-19. I am so grateful to all of you haveworked together to get us to a place where a slow, safe reopening is possible.”

As recovery planning continues, Public Health is issuing a five-stage roadmap to recovery thatdescribes a phased approach to relaxing select directives of the Safer at Home Order and areopening process for certain business sectors. LA County is currently in stage one of theSafer at Home recovery stage. However, the County anticipates beginning stage two as soonas Friday, May 8 by allowing florists and some retailers to offer curbside pickup. Cardealerships, golf courses and trails can also open with appropriate safeguards inplace. Physical distancing and infection control protocols must be adhered to and cloth facingcoverings must be worn. Later next week additional restrictions will be lifted to include manyretailers, manufacturers, and other recreational facilities. The next three stages include thepotential opening in phases of higher-risk businesses like movie theaters, schools, collegesand universities, followed by conventions and spectator events, to finally normal operations.Each sector will have safe reopening protocols that must be adhered to.Until final stage five is reached, Health Officer Orders and directives will still continue toensure that we slow the spread of COVID-19 to prevent an overwhelming surge of COVID-19cases at healthcare facilities. Physical distancing, wearing cloth face coverings, frequent handwashing, self-isolation and self-quarantine will continue to be very important throughout theforeseeable future. People who have underlying health conditions will still be at much greaterrisk for serious illness from COVID-19, so it will continue to be very important for the County'svulnerable residents to stay at home as much as possible, to have groceries and medicinedelivered, and to know to call their providers immediately if they have even mild symptoms.An interactive dashboard is available that provides an overview on COVID-19 testing, casesand deaths along with maps and graphs showing testing, cases and death data by communitypoverty level, age, sex and race/ethnicity. To view Public Health's COVID-19 SurveillanceDashboard, ovid19 surveillance dashboard/Additional things you can do to protect yourself, your family and your community are on thePublic Health website, www.publichealth.lacounty.gov.Please see additional information below:TotalCasesLaboratory Confirmed Cases28644-- Los Angeles County (excl. LB and Pas)27373

The Value of Postsecondary Credentials in the Labor Market .