Proposal To Change The Governance Structure Of Hoe Tonga 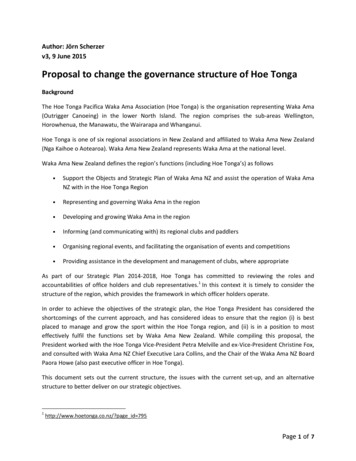 Author: Jörn Scherzerv3, 9 June 2015Proposal to change the governance structure of Hoe TongaBackgroundThe Hoe Tonga Pacifica Waka Ama Association (Hoe Tonga) is the organisation representing Waka Ama(Outrigger Canoeing) in the lower North Island. The region comprises the sub-areas Wellington,Horowhenua, the Manawatu, the Wairarapa and Whanganui.Hoe Tonga is one of six regional associations in New Zealand and affiliated to Waka Ama New Zealand(Nga Kaihoe o Aotearoa). Waka Ama New Zealand represents Waka Ama at the national level.Waka Ama New Zealand defines the region’s functions (including Hoe Tonga’s) as follows Support the Objects and Strategic Plan of Waka Ama NZ and assist the operation of Waka AmaNZ with in the Hoe Tonga Region Representing and governing Waka Ama in the region Developing and growing Waka Ama in the region Informing (and communicating with) its regional clubs and paddlers Organising regional events, and facilitating the organisation of events and competitions Providing assistance in the development and management of clubs, where appropriateAs part of our Strategic Plan 2014-2018, Hoe Tonga has committed to reviewing the roles andaccountabilities of office holders and club representatives.1 In this context it is timely to consider thestructure of the region, which provides the framework in which officer holders operate.In order to achieve the objectives of the strategic plan, the Hoe Tonga President has considered theshortcomings of the current approach, and has considered ideas to ensure that the region (i) is bestplaced to manage and grow the sport within the Hoe Tonga region, and (ii) is in a position to mosteffectively fulfil the functions set by Waka Ama New Zealand. While compiling this proposal, thePresident worked with the Hoe Tonga Vice-President Petra Melville and ex-Vice-President Christine Fox,and consulted with Waka Ama NZ Chief Executive Lara Collins, and the Chair of the Waka Ama NZ BoardPaora Howe (also past executive officer in Hoe Tonga).This document sets out the current structure, the issues with the current set-up, and an alternativestructure to better deliver on our strategic objectives.1http://www.hoetonga.co.nz/?page id 795Page 1 of 7

Current structureIn the current structure, the region has a regional committee that is tasked with carrying out itsfunctions. The regional committee is made up of club representatives (1 per club), and the executiveofficers (up to 5).There are currently 11 affiliated clubs in the Hoe Tonga region, so the committee can have a total of upto 16 people. Each person has one vote. At AGMs and SGMs only club representatives are eligible tovote (eg to elect the executive officers). The committee makes relevant strategic decisions, although dayto day matters rest with the executive, and increasingly the administrator.The current constitution defining the structure is available at www.hoetonga.co.nz/?page id 795(‘About’).The figure below illustrates the structure and relevant linkages.Page 2 of 7

ProblemsThere are a number of problems with the current set up.Lack of clarity of role of club representativesClub representatives are formally tasked with representing the views of the clubs at the regionalmeetings, and representing Hoe Tonga’s views at club meetings. This would suggest that they are keymessengers between Hoe Tonga, clubs and paddlers. However, as the regional committee is required tomake key decisions on a regular basis, they do not just act as representatives of the clubs, they alsoneed to think about what is in the best interests of the sport in the region as a whole. There can besome level of confusion and misunderstanding regarding the role. What happens when the two rolesconflict?Rising importance of other information channelsWhile the role of the club representative does entail a messenger function, in practice most informationbetween Hoe Tonga and paddlers is actually provided through other means. This includes the regionalwebsite, Facebook, and emails to/from club executives.In particular, the website has been an increasingly important mechanism for Hoe Tonga to reachpaddlers, because a lot of information does not tend to be passed on. This is partly a function of nonattendance of club reps at meetings.Loss of ability to make decisionsA small number of clubs and their reps have consistent attendance. However, in many cases attendanceis inconsistent, and in some cases clubs have not sent representatives in a number of years.On occasions this has led to a lack of a quorum at meetings, thus relevant decisions cannot be made. Forexample, at a number of meetings there have been 3 executive officers, and only 2 or 3 clubs (out of 11).Decision-making has become increasingly difficult over the past two years. This is despite making phoneconferencing facilities available at meetings, to assist clubs that are located more than 1 hour drive fromWellington/Porirua. Only one of three clubs located outside the Wellington/Porirua area has taken upthis opportunity.Lack of continuityThe position of Hoe Tonga club rep can change frequently in some clubs (eg someone else from within aclub may attend instead of their formal club rep). This can lead to a lack of continuity, and those peoplewon’t be in a position to actively contribute to the committee as they may not be aware of relevantprevious discussions and/or decisions. They may also be unclear about the role of the club rep (egrelevant messages are not passed on, or they may not know what their club’s position is on a certainissue).Page 3 of 7

Lack of specialist skillsThe nature of the region’s governance and administration increasingly requires specialist skills (egfinance, strategic planning, governance, etc) but the combined regional membership (clubs, paddlers)has little ability to affect the make-up of the regional committee as a whole. In a number of cases it isjust whoever is available on the day to attend, as opposed to who has the best skills to contributeactively.Other contextual factorsNo direct link with Waka Ama New ZealandHow can we ensure that relevant goals, objectives, and initiatives are aligned and coordinated withWaka Ama NZ? For example, Hoe Tonga has no vote at the Waka Ama NZ AGM, and equally, Waka AmaNZ has no direct input into regional matters. While regions are required to be consistent with the goalsand objectives of Waka Ama NZ, and NKOA has defined the role of regions, it is timely to think aboutwhether the current regional structure can deliver on its role effectively and whether there needs to bea better ‘connection’.Initiatives in other regionsSome of the above problems are not unique to Hoe Tonga. Both the Auckland region (AROCA) and theGisborne/Hawkes Bay region are considering potential improvements and associated governancechanges. AROCA is most advanced, on 24 May 2015 the region agreed unanimously to change itsgovernance structure to a Board structure. They are planning to formally adopt a revised constitution byJuly 2015.Page 4 of 7

Proposed structureIn order to address the above concerns, a change in structure of the regional governance framework isproposed. With it, the roles of officer holders would change.BoardIn the proposed structure, a Board would govern the region. This Board would be made up of 4 to 6members, each with relevant skills to contribute. Up to 4 board members would be elected by the clubswithin the region, and up to an additional 2 people would be appointed by a special appointmentcommittee involving Waka Ama NZ. The appointment committee could also include anotherindependent sports body (eg Sport Wellington).The Board would meet at least 4 times per year.The Board would be tasked to make decisions based on the whole of the sport and all its members inthe region. The Board would look after the best interests of Waka Ama (present and future) in theregion. This would be the first duty of members of the Board.The Board would be responsible for making decisions of a strategic or policy nature, and will do so onbehalf of the Waka Ama community in the region. In the short to medium term, the Board will have toassume both governance and management responsibilities. In the longer term it is envisaged that theBoard would focus on governance, with the administrator taking on all management responsibilities.AdministratorAs currently, a paid administrator would assist in the administration of the region. The Board wouldappoint the administrator, who in turn will report to the Board.The role of the administrator is to support the Board in carrying out its duties, and by assuming as muchas possible the majority of administrative tasks (communication, website and Facebook updates, generaladmin, funding applications, event planning and organisation, etc).ClubsAs currently, the clubs in the Hoe Tonga region would be the members of Hoe Tonga. Under this newstructure they would continue to account for 100% of the votes at the AGM, as they currently do. In thisway the Board is accountable to the members of Hoe Tonga.The role of club reps would no longer exist. However, Hoe Tonga already consults with clubs on allstrategic and policy decisions and this would continue to be the case. In addition, the Board would meetwith clubs at least once per year at the AGM where they may raise concerns or issues that may be raisedat Board level. There is also the option of having an additional meeting if required or requested (eg toenable consultation, etc) and clubs have the option of making contact with the Board via the Chair.Page 5 of 7

In addition to this, the administrator and the Board would communicate with all clubs and paddlers viaits website, Facebook, and email, as is currently the case.Clubs and paddlers would continue to be able to contact the administrator at any time with concerns (asis already the case); the administrator is the main point of contact for clubs and paddlers.AGMEvery year at the AGM clubs would vote on relevant rules, constitutional changes, and remits as raisedby clubs or the Board, as per the constitution.In terms of votes, the proposal is for each club to have one vote (as is currently the case).The Board would NOT vote at the AGM.There would be provision within the constitution for clubs to call a special general meeting should theyfeel they have just cause or evidence that the Boards’ ability to govern is compromised.The following figure illustrates the proposed structure.Page 6 of 7

BenefitsThe benefits of a board structure for Hoe Tonga are as follows:-Clear role of board members to work for the benefit of the region and its membersImproved ability to make effective decisionsBetter spectrum of governance and specialist skills representedImproved continuity on the board, as board members fulfill a dedicated roleImproved link to Waka Ama NZ (via input to appointed board member)Continued opportunity for discussions of regional issues at special regional meetings (eg toenable consultation and exchange of ideas)Continued communication via web, email, and facebookAs effectiveness Hoe Tonga increases as a result of the change in governance, this is expected toenable further growth of the sport in the regionNext steps 8 June: Presentation of proposal at regional committee meeting (COMPLETED) 29 June: Further discussion of proposal, meeting between regional clubs and WANZ CEO LaraCollins will provide an opportunity to discuss WANZ experience, and experience in other regions 15 July: Deadline for clubs and paddlers to provide formal feedback by way of submissions 22 July: Revised proposal and draft constitution sent to clubs (via email, website, and FB), SpecialGeneral Meeting to be scheduled for later in August August (tentative): Special General Meeting to formalise changes, if applicablePage 7 of 7

Data Governance: From theory to practice