Apportionment Under The AMA Guides 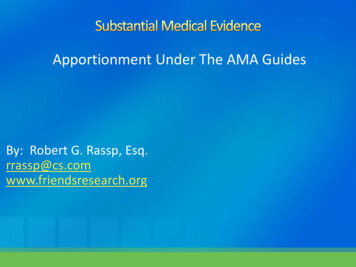 “Reasonable Medical Probability” means that there is at least a51% probability that something is true. It is somewhat higher than the “preponderance of evidence” legal standardthat means a feather of weight that is greater than 50% probability of truthor “more probable than not.” Case law allows a physician to state what “approximate percentage” ofpermanent disability is work related and what approximate percentage isnon-industrial to a degree of reasonable medical probability. See MarleneEscobedo vs. Marshalls (2005) 70 Cal. Comp. Cases 604 (WCAB en bancdecision); E.L. Yeager Construction vs. WCAB (Gatten) (2006) 145 Cal. App.4th 922, 52 Cal. Rptr. 3d 133, 71 Cal. Comp. Cases 1687.

The focus of this presentation is on “cross-over” cases – inwhich there are alleged orthopedic, psychiatric, andinternal medical injuries, aka “ortho, psyche, and internal” Further focus is on apportionment between separateinjuries where both have the AMA Guides apply The roles of the doctor, the WCJ, the WCAB, and you The take-aways today apply to all issues of developing therecord before, during, and after trial

Radiator USA vs. WCAB (2015) 80 Cal. Comp. Cases 79(Kang) Embarrasses the parties, the WCJ, and the WCAB Admitted specific injury for truck driver to his back, diagnosis ofosteoporosis, sleep disorder, and depression AME ortho (Pechman) opines MMI, 50% PD due to industrialinjury, 50% due to non-industrial osteoporosis. AME in rheumatology (Dr. Bluestone) says IW has osteoporosisthat is non-industrial but IW also is depressed with a sleepdisorder

Radiator USA vs. WCAB (2015) 80 Cal. Comp. Cases 79(Kang) The WCAB as an administrative agency has an affirmative duty todevelop the record, especially if medical evidence is evenlybalanced on the issue of industrial causation. “The medical reporting in this case had a serious flaw which theappeals board should have recognized, and, had the responsibilityto cure.” “While the defendant could have acted more vigorously, it is alsotrue that the WCAB may not leave undeveloped matters which itacquired, its specialized knowledge should identify as requiringfurther evidence.”

If a psyche or internist hitches his or her wagon onapportionment by an orthopedic surgeon Other physicians must indicate how and why they agree with theortho based on their own expertise If other physician says the injuries are “inextricably intertwined”and PD cannot be apportioned between multiple injuries, thephysician must state how and why he or she came to thisconclusion and why he or she is not following the orthopedicapportionment What does Benson really say about this? Benson vs. WCAB (2009) 170 Cal. App. 4th 1535, 74 Cal. Comp. Cases 113

APPORTIONMENT CONSIDERATIONSIn considering apportionment, a physician should determineapportionment of permanent disability utilizing the following factors: How severe a specific injury was in terms of impact (e.g. did theApplicant fall 3 feet off a chair or 12 feet off a ladder?) How arduous was the Applicant’s job as performed? Was there a gap in medical treatment to the same part of body froma prior injury (industrial or non-industrial prior injury)?

APPORTIONMENT CONSIDERATIONSIn considering apportionment, a physician should determineapportionment of permanent disability utilizing the following factors: Was there continuous treatment from a prior injury to the same partof body that led up to a more recent injury? Did the Applicant recover from a prior injury to the same part ofbody? What does the diagnostic imaging studies show after a prior injury orfrom prior medical treatment for a non-industrial condition to thesame part of body? Look at the chronology of medical events from when there were nosigns, symptoms, or complaints to the present time.

APPORTIONMENT CONSIDERATIONS – Prior Awards: 1997 v. 2005 PDRS If a prior award was based on the 1997 or earlier PDRS, then you cannot simplysubtract a prior permanent disability rating from the current one that is based onthe AMA Guides. This is because it would be like comparing apples to oranges. See for example, County of Los Angeles vs. WCAB (Barnett) (2010) 75 Cal. Comp.Cases 155 (writ denied); Minvielle vs. County of Contra Costa (2010) 76 Cal. Comp.Cases 896 writ denied). Remember, before you can apportion permanent disability, you must ratepermanent disability and adjust for DFEC [or adjustment factor of 1.4 if the date ofinjury is on or after 1/1/13], age, and occupation first. Then you applyapportionment under Sections 4663 or 4664.

APPORTIONMENT CONSIDERATIONS – Prior Awards: 1997 PDRS v. 2005 PDRS If prior award was based on grip loss using work restrictions (no repetitivegripping, grasping, and fine manipulation) from carpal tunnel surgery, 15% PD Post 1/1/05 AMA injury was a fractured wrist, rating was also based on grip loss WCJ allowed the subtraction method because the same AME evaluated both casesand conducted the grip testing the same way in both evaluations (Dynamometer,setting “B”) indicating same in the AME report for AMA injury case.

APPORTIONMENT CONSIDERATIONS – Prior Awards: 2005 PDRS v. 2005 PDRS For apportionment under Labor Code Section 4664 between a prioraward that was based on the AMA Guides and a new injury involvingthe same part of body, you must take these steps:How was prior WPI determined? E.G. DRE vs. ROM for spine?How is current WPI determined?What were the objective findings for prior rating vs. current one?Is there overlap between the prior permanent disability and the current one?An Applicant cannot claim he or she recovered from a prior injury that resultedin an Award if apportionment is established under Section 4664 prior award An Applicant can claim he or she recovered from a prior permanent disability ifapportionment is under Section 4663.

APPORTIONMENT CONSIDERATIONS – Prior Awards: 2005 PDRS v. 2005 PDRS For example, if a knee injury in 2005 rated 5% permanent disability based on a tornmedial meniscus repair and a new 2014 injury involves a torn lateral meniscusrepair, there would be no apportionment under Section 4664 because the newknee impairment involves a different part of the knee. However, if the prior award is based on consideration of Almaraz-Guzman III[Milpitas USD vs. WCAB (Guzman) 187 Cal. App. 4th 808, 115 Cal. Rptr. 3d 112, 75Cal. Comp. Cases 837] in terms of loss of function, the current rating may bereduced by all or part of the prior rating, depending on overlap. Defendants have the burden of proving overlap between the prior award and thenew rating. See Kopping vs. WCAB (2006) 143 Cal. App. 4th 1099, 71 Cal. Comp.Cases 1229.

APPORTIONMENT CONSIDERATIONS – Prior Awards: 2005 PDRS v. 2005 PDRS However, if the prior award is based on consideration of Almaraz-Guzman III[Milpitas USD vs. WCAB (Guzman) 187 Cal. App. 4th 808, 115 Cal. Rptr. 3d 112, 75Cal. Comp. Cases 837] in terms of loss of function, the current rating may bereduced by all or part of the prior rating, depending on overlap. E.G. Prior medial meniscus injury is rated based on Table 17-5 antalgic gait under AG-III and newinjury WPI is based on Table 13-22 Station and Gait, you might be able to argue about subtraction Defendants have the burden of proving overlap between the prior award and thenew rating. See Kopping vs. WCAB (2006) 143 Cal. App. 4th 1099, 71 Cal. Comp.Cases 1229. Sanchez case: Old injury is ankle sprain 7% PD, based on subjective complaints, new injury was afractured ankle resulting in loss of ROM, no apportionment

APPORTIONMENT CONSIDERATIONS – Prior Awards: 2005 PDRS v. 2005 PDRS Defendants have the burden of proving overlap under the Kopping case which hasproven to be elusive, if not impossible. If the prior 2005 knee injury in the example above had been rated based on theinjured worker having an antalgic gait (Table 17-5) and the current rating for a 2014injury is based on a total knee replacement (Tables 17-35 and 17-33), thendefendant would have a hard time proving overlap. On the other hand if the prior 2005 injury award was based on arthritis of themedial, lateral, or patellofemoral compartment (Table 17-31) and the currentrating was based on a total knee replacement then there is total overlap anddefendant could make the argument to subtract the prior award from the currentone pursuant to Labor Code Section 4664(b).

The more points, the better the total kneereplacement result.Table 17-33 TKR:

APPORTIONMENT CONSIDERATIONS – Prior Awards: 2005 PDRS v. 2005 PDRS Otherwise, if Defendant is not able to prove overlap, then theremaining argument regarding apportionment defaults to an analysisof apportionment under Labor Code Section 4663 – what percentageof the current disability is caused by the 2014 injury and whatpercentage of the current disability is due to other factors, includingthe prior award?

APPORTIONMENT CONSIDERATIONS – Prior Awards: 2005 PDRS v. 2005 PDRS What if the prior award in a 2005 lumbar spinal case was based onthe DRE method, let’s say DRE Category II 5% WPI, and the new 2014injury to the lumbar spine now rates DRE Category III 13% WPI? Do you automatically subtract the prior award under Section 4664apportionment? If not, how does LC 4663 apportionment work? Again, defendant would have to prove overlap for the LC 4664presumption. It seems that the analysis of overlap is a medicalquestion as much as it is a legal concept.

APPORTIONMENT CONSIDERATIONS – Prior Awards: 2005 PDRS v. 2005 PDRS If the prior award involved an L4-L5 problem withoutradiculopathy and the new injury involves a herniated disc at L5S1 then there is no overlap. However, if prior award was based on AG-III then .? Plus the DRE III rating is due to a radiculopathy that did not existfrom the prior 2005 injury. If both injuries involved the same level of the lumbar spine thenyou have a fairly good argument of overlap but that must beestablished medically by a treating or evaluating physician.

APPORTIONMENT CONSIDERATIONS – Prior Awards: 2005 PDRS v. 2005 PDRS What if the prior award was based on DRE and the new injury is based onROM? Can there be overlap? There is no case law on this issue yet but it is likely to arise soon. It is probablethat counsel would have to focus on the medical diagnosis, the levels ofpathology, and the cause of permanent impairment for each injury todetermine if overlap exists.

APPORTIONMENT CONSIDERATIONS – Prior Awards: 2005 PDRS v. 2005 PDRS If the prior award was based on ROM and the new award is based onROM then it is possible to prove overlap with subtraction ofpermanent disability under Section 4664(b). In that event, the issue is whether the ROM measurements areconducted the same way between the earlier MMI evaluation andthe more recent one. Moreover, Table 15-7 will be the final determinate of whether trueoverlap occurs because the ROM method relies on a spinal diagnosisthat could be totally different between two or more injuries to thesame sub-region of the spine. If there are different spinal diagnosisfor each injury from Table 15-7 then there probably is no overlap,unless defendant would be able to convince a physician how overlapcan occur when the spinal diagnosis between two or more injuriesare different.

Take Aways Physicians need to separately and thoroughly address apportionment ofpermanent disability based on his or her own independent analysis If a physician relies on another physician’s apportionment analysis, he or she muststate how and why he or she agrees with the apportionment, e.g. internalmedicine or psychiatric AME or PQME adopts apportionment based on orthopedicsurgeon’s conclusion The parties need to develop the record on causation of injury, causation ofpermanent disability, and apportionment when the Applicant is MMI prior to trial Do not sit idly by while the record in a case is deficient on crucial medical-legalissues (Lawrence Lorenz vs. Encino Hospital 2014 Cal. Wrk. Comp. P.D. LEXIS 410)

under the AMA Guides 5th Edition . APPORTIONMENT CONSIDERATIONS – Prior Awards: 1997 v. 2005 PDRS If a prior award was based on the 1997 or earlier PDRS, then you cannot simply subtract a prior permanen

Guide to the Guides - Fifth Edition

State-by-State Use of AMA Guides - LexisNexis

Guide to the Guides - eMedicoLegal

Routine Venipuncture and/or Collection of Specimens

Guides to the Impairment Rating of the Lumbar Spine - COA