REPORT ON EXAMINATION OF THE CASTLEPOINT 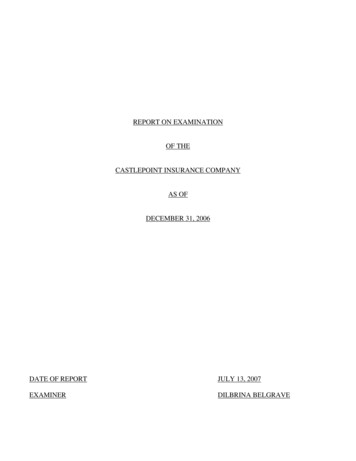 STATE OF NEW YORKINSURANCE DEPARTMENT25 BEAVER STREETNEW YORK, NEW YORK 10004July 13, 2007Honorable Eric R. DinalloSuperintendent of InsuranceAlbany, New York 12257Sir:Pursuant to the requirements of the New York Insurance Law, and in compliance with theinstructions contained in Appointment Number 22648 dated May 10, 2007 attached hereto, I havemade an examination into the condition and affairs of CastlePoint Insurance Company as ofDecember 31, 2006, and submit the following report thereon.Wherever the designations “the Company” appears herein without qualification, they shouldbe understood to indicate CastlePoint Insurance Company.Wherever the term “Department” appears herein without qualification, it should beunderstood to mean the New York Insurance Department.The examination was conducted at the Company’s home office located at 120 Broadway, 30thFloor, New York, NY 10271.

1.2SCOPE OF EXAMINATIONThe previous examination was conducted as of December 31, 2001.This examinationcovered the 5-year period from January 1, 2002 through December 31, 2006. Transactions occurringsubsequent to this period were reviewed where deemed appropriate by the examiner.The examination comprised a verification of assets and liabilities as of December 31, 2006.The examination included a review of income, disbursements and company records deemednecessary to accomplish such analysis or verification. A review or audit was also made of thefollowing items as called for in the Examiners Handbook of the National Association of InsuranceCommissioners (“NAIC”):History of CompanyManagement and controlCorporate recordsFidelity bond and other insuranceTerritory and plan of operationAccounts and recordsFinancial statementsA review was also made to ascertain what action was taken by the Company with regard tocomments and recommendations contained in the prior report on examination.This report on examination is confined to financial statements and comments on thosematters, which involve departures from laws, regulations or rules, or which are deemed to requireexplanation or description.2.DESCRIPTION OF COMPANYThe Company was incorporated under the laws of the State of New York on August 28, 1922,as a direct writing co-operative fire insurance company under the name of the Surety Co-operativeFire Insurance Company.During the examination period Christiania Insurance Company(“Christiania”) purchased the Company (last known as Surety Reinsurance Company) and transferredSurety Reinsurance Company’s entire book of business to itself. On January 1, 1997, FolksamericaReinsurance Company (“Folksamerica”) purchased Christiania Insurance Company (“Christiania”).The entire book of Christiania’s business, including that of Surety Reinsurance Company wastransferred to Folksamerica under a transfer and assumption agreement.

3On May 29, 1998, Surety Reinsurance Company was purchased by Lawrenceville Holdings,Inc. (“LHI”), a New Jersey corporation ultimately controlled by Medical Inter-Insurance Exchange(”MIIC”) of New Jersey. LHI owns 100% of the outstanding stock of the Company. The Companywas then granted permission to change its name to MIIX Insurance Company of New York.Upon acquisition, the Company had capital paid-in of 3,000,000 consisting of 75,000 sharesof common stock at 40 par value per share. On April 20, 1999, the Company received permissionunder Section 1206 of the New York Insurance Law to increase its paid-in capital to 4,000,000consisting of 100,000 shares of common stock at 40 per share. All authorized shares are issued andoutstanding.On September 28, 2004, the New Jersey Department of Banking and Insurance placed MIIXInsurance Company (intermediate parent of LHI) into rehabilitation. On that date, all of the officersand directors of MIIX Insurance Company and MIIC resigned their positions.On June 29, 2006, Tower Group, Inc. (“TGI”), a Delaware corporation ultimately controlledby Michael Lee, purchased from LHI all of the issued and outstanding stock of MIIX InsuranceCompany of New York. The Company was then granted permission to change its name to TowerIndemnity Insurance Company of New York.On December 4, 2006, CastlePoint Management Corp., a Delaware Corporation (“CPM”)purchased from TGI all of the issued and outstanding capital stock of Tower Indemnity InsuranceCompany of New York.The Company was then granted permission to change its name toCastlePoint Insurance Company.Gross paid in and contributed surplus is 2,718,028. As a result of the Company’s purchase,gross paid in and contributed surplus increased by 198,909 during the examination period asfollows:YearDescription200120062006Beginning gross paid in and contributed surplusSurplus contributionSurplus AdjustmentTotal surplus contributionsEnding gross paid in and contributed surplus2006Amount 2,519,119 201,798(2,889)198,909 2,718,028

5A review of the minutes of the board of directors’ meetings held during the first two years ofthe examination period indicated that the meetings were generally well attended and each boardmember has an acceptable record of attendance. However, on September 28, 2004, all of theCompany’s officers and directors resigned their positions. The Company’s board of directors wasreconstituted on December 18, 2006. The first board of directors’ meeting was held on January 4,2007. The attendance was not mentioned in the board of directors’ minutes.As of December 31, 2006, the principal officers of the Company were as follows:B.NameTitleGregory T. DoyleJames J. DulliganRoger A. BrownPresidentTreasurerSecretaryTerritory and Plan of OperationAs of December 31, 2006, the Company was licensed to write business in New York.As of the examination date, the Company was authorized to transact the kinds of insurance asdefined in the following numbered paragraphs of Section 1113(a) of the New York Insurance Law:Paragraph4567891011121314151920Line of BusinessFireMiscellaneous property damageWater damageBurglary and theftGlassBoiler and machineryElevatorAnimalCollisionPersonal injury liabilityProperty damage liabilityWorker’s compensation and employer’s liabilityMotor vehicle and aircraft physical damageMarine and inland marine

8At December 31, 2006, the Company was party to the following informal arrangements withother members of its holding company system:Informal Tax Reimbursement ArrangementsThe Company had informal tax reimbursement arrangements with both TGI (an affiliate) andCastlePoint Management (“CPM”) (its parent) in which TGI and CPM paid the estimated taxes forthe Company and the Company would reimburse TGI and CPM at a later date.It is recommended that the Company finalize a written tax allocation agreement with itsparent or any member in its holding company system and file it with the Department pursuant to theprovisions of Department Circular Letter 33 (1979).Informal Service ArrangementThe Company and CPM were party to an informal business services arrangement in whichCPM provided the office space, general administrative and business services to the Company.It is recommended that the Company draft and file a written business services agreement withthe Department pursuant to Section 1505(d)(3) of the New York Insurance Law.G.Accounts and RecordsIt was noted that when completing the Company’s Annual Statement Blank, the Companyfailed to classify certain balance sheets items in accordance with the NAIC Annual StatementInstructions. The examiners noted this condition relative to items such as cash equivalents and otherexpenses.The Company reported its money market fund in Schedule E Part 2. However, according tothe NAIC Annual Statement Instructions, shares of all mutual funds should be reported as commonstock, except exempt money market funds and class one money market funds which are reported inSchedule D or Schedule DA if short-term.

9The company reported on page 3 of its annual statement a liability classified as “Otherexpenses” in the amount of 66,553. This amount was comprised of a payable to Tower Group Inc.for settlement of federal income taxes as of December 1, 2006 and the settlement of inter-companycustody fees. However, according to the NAIC Annual Statement Instructions, this account shouldbe reported as a “Payable to parent, subsidiaries and affiliates.”It is recommended that the Company adhere to the NAIC Annual Statement Instructions byclassifying balance sheet items under their proper line item and completing all required schedules.

103.AFINANCIAL STATEMENTSBalance SheetThe following shows the assets, liabilities and surplus as regards policyholders as ofDecember 31, 2006 as determined by this examination and as reported by the Company:AssetsAssets NotAdmittedAssetsBondsCash, cash equivalents and short-term investmentsMiscellaneous Assets 2,445,0006,045,6062,653Total assets 8,493,259 Net AdmittedAssets 000 2,445,0006,045,6062,6530 8,493,259Liabilities, Surplus and Other FundsLiabilitiesOther expenses (excluding taxes, licenses and fees)Current federal and foreign income taxes 66,5531,929Total liabilities 68,482Surplus and Other FundsCommon capital stockGross paid in and contributed surplusUnassigned funds (surplus)Surplus as regards policyholdersTotal liabilities, surplus and other funds 4,000,0002,718,0281,706,7498,424,777 8,493,259NOTE: The Company indicated that the Internal Revenue Service has not performed an audit of theCompany’s federal income tax returns for any year covered by this examination. With theexception of any impact that might be caused from any examination changes contained in thisreport, the examiner is unaware of any potential exposure of the Company to any further taxassessments and no liability has been established herein relative to such contingency.

4.13SUBSEQUENT EVENTOn January 16, 2007, the Company submitted to this Department for our non-disapprovalvarious pooling agreements between itself and Tower Insurance Company of New York (“TICNY”).On February 8, 2007, the pooling agreements were disapproved because the Company was notlicensed for the same lines of business as TICNY.On February 28, 2007, the Company submitted a request to amend its license to add the linesof business it needed so that it would be licensed for the same lines of business as TICNY. TheCompany was advised that its reported surplus as regards policyholders as of December 31, 2006 wasinsufficient to add those lines by approximately 1 million. On March 19, 2007, the Companyreceived a capital contribution from its parent CastlePoint Management Corporation in the amount of 80,422,065 and the license amendment was subsequently approved.The Company subsequently withdrew its request to enter into the pooling agreements withTICNY.5.COMPLIANCE WITH PRIOR REPORT ON EXAMINATIONThe prior report on examination contained two recommendations as follows (page numbersrefer to the prior report):ITEMA.PAGE NO.Board of DirectorsIt is recommended that the Company elect another board member thatresides within New York State in accordance with Section1201(a)(5)(b)(vi) of the New York Insurance Law.5The Company has complied with this recommendation.B.Accounts and RecordsIt is recommended that management update the signatory informationfor its cash accounts.As of this examination, this recommendation was not applicable.9

Appointment No. 22648STATE OF NEW YORKINSURANCE DEPARTME1VT/.Eric R. Dinallo.Superintendent of Insurance of the State of New York,pursuant to the provisions of the Insurance Law, do hereby appoint:Dilbrina Belgraveas proper person to examine into the affairs oftheCASTLEPOINT INSURt\NCE COl\ilPANYand to make a report to me in H1riting ofthe condition of the saidCompanywith such other information as he shall deem requisite.In Witness iVhereoj; l have hereunto subscribed by thename and crffixed the official Seal ofthis Department, atthe City ofl\/ew York,this J Oth day of 1'1ay, 2007ERIC R. DINALLOSuperintendent of Insurance

REPORT ON EXAMINATION AS TO THE CONDITION

REPORT ON EXAMINATION OF THE AMERICAN GENERAL

REPORT ON EXAMINATION OF FIRST NONPROFIT

An Examination of Innovations in Alexander Scriabin’s Late .