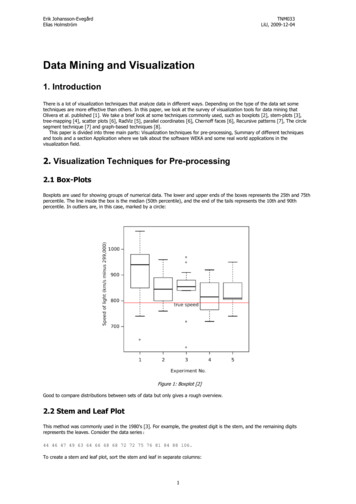 Erik Johansson-EvegårdElias HolmströmTNM033LiU, 2009-12-04Data Mining and Visualization1. IntroductionThere is a lot of visualization techniques that analyze data in different ways. Depending on the type of the data set sometechniques are more effective than others. In this paper, we look at the survey of visualization tools for data mining thatOlivera et al. published [1]. We take a brief look at some techniques commonly used, such as boxplots [2], stem-plots [3],tree-mapping [4], scatter plots [6], RadViz [5], parallel coordinates [6], Chernoff faces [6], Recursive patterns [7], The circlesegment technique [7] and graph-based techniques [8].This paper is divided into three main parts: Visualization techniques for pre-processing, Summary of different techniquesand tools and a section Application where we talk about the software WEKA and some real world applications in thevisualization field.2. Visualization Techniques for Pre-processing2.1 Box-PlotsBoxplots are used for showing groups of numerical data. The lower and upper ends of the boxes represents the 25th and 75thpercentile. The line inside the box is the median (50th percentile), and the end of the tails represents the 10th and 90thpercentile. In outliers are, in this case, marked by a circle:Figure 1: Boxplot [2]Good to compare distributions between sets of data but only gives a rough overview.2.2 Stem and Leaf PlotThis method was commonly used in the 1980's [3]. For example, the greatest digit is the stem, and the remaining digitsrepresents the leaves. Consider the data series:44 46 47 49 63 64 66 68 68 72 72 75 76 81 84 88 106.To create a stem and leaf plot, sort the stem and leaf in separate columns:1

Erik Johansson-EvegårdElias Holmström45678910 TNM033LiU, 2009-12-044 6 7 93 4 6 8 82 2 5 61 4 86It is useful to get a quick overview of the density of a data set and to observe outliers. However, when dealing with large setsof data, the plot can be cluttered, and other methods are more suitable, such as a box plot or a histogram.3. Summary of Different Techniques and ToolsIn 2003 Olivera et al. published [1]. A survey of visualization tools for data mining. An overview will be given of the mostpopular methods in the survey classified by Keims taxonomy [11] . He have written several papers on the topic and chooses toclassify the different techniques into six types: Geometric projection, icon-based, pixel-oriented, hierarchical, graph-based andhybrid types. Interaction methods will be briefly discussed and also some more recent techniques will be presented.3.1 Geometric ProjectionGeometric projection techniques are a good choice for finding outliers and correlation between attributes in multivariate data. Ageometric projection technique does this by using transformations and projections of the data. When using large data sets aclustering algorithm is usually necessary to apply before the visualization technique to avoid cluttered and unclear data causedby the too much information. Some widely used geometric projection techniques are:Scatter plotsA scatter plot [6] is one of the most common visualization techniques and can be visualized both in 3D and 2D. The scatter plotvisualizes different attributes of the data on the x,y axis for 2D visualizations and also along the z-axis in 3D. Scatter plots areusable to find correlations between attributes in arbitrary small data sets. If the data set gets too big or contains too manyattributes the scatter plot gets cluttered and hard to interpret.Figure 2: Parallel coordinates [9]Parallel coordinatesIf the data contains many attributes you will need several scatter plots to visualize all attributes and it might become hard tosee patterns. A technique often used for multivariate data is parallel coordinates [6]. They work by visualizing each attribute ona vertical axis and connecting each individual data with lines between the axis. Parallel coordinates strength is the possibility tofind correlations between a high amount of attributes. The weakness of parallel coordinates is the same as with scatter plots, ifthe data set is too large it easily gets cluttered.RadVizRadViz [5] is another technique for visualizing multivariate data. It maps data to a 2D plane using Hooke's law and a set ofanchor points usually specified from the attributes.3.2 Icon-basedIcon-based techniques visualize data by changing the properties of an icon or glyph according to the data. An early version wasChernoff faces [6] where data is mapped to different face parts as nose, mouth, eyes and more. For example how rich peopleare can be mapped to the mouth of the Chernoff face. Rich people represented by a happy mouth and and poor people by asad mouth. Other methods are:2

Erik Johansson-EvegårdElias HolmströmTNM033LiU, 2009-12-04Figure 3: Chernoff faces [10]Icon-based methods have the strength of being easily interpreted if icons/glyphs are chosen wisely. A poor choice can make itdifficult to distinguish differences.3.3 Pixel-orientedPixel-oriented or Pixel-based techniques using a single pixel to represent a data attribute. Depending on the value it is mappedto a color-map to choose the correct color for the pixel.Pixel-oriented techniques can also be either query dependent or independent. When independent all attributes of the data aredrawn on screen independently of the each other. Using a dependent technique you specify a query that decides how pixelsshould be placed enabling the possibility to find patterns. When using a pixel-oriented method it is possible to visualize verylarge data sets as each instance only needs a single pixel to be visualized. If not using a good method of drawing pixels youwill end up with a visualization that can't be interpreted.Recursive patternRecursive patterns [7] makes it possible to group data when visualizing to make it easier to interpret. It works by using severaldifferent levels of patterns by specifying height and width of for the different levels. A first level pattern might organize thepixels to make it possible to interpret data over a year while the second makes it possible to interpret over the month.Circle segmentsThe circle segment technique [7] divides a circle into k-dimensions for the amount of attributes k in the data set. Within eachdimension each attribute is then visualized by coloring a single pixel. Close to the center all attributes are close making it easierto compare their values.3.4 HierarchicalHierarchical techniques visualize data using subspaces created from the data's attributes. Hierarchical techniques are usablewhen some attributes of the data might be more relevant than other.3

Erik Johansson-EvegårdElias HolmströmTNM033LiU, 2009-12-04Figure 4: Treemap used for displaying news http://newsmap.jp/TreemapTreemaps [4] display hierarchical data using rectangles. Each branch of the tree is assigned a rectangle. Then each sub-branchgets assigned to a rectangle and this continues recursively until a leaf node is found. Depending on choice the rectanglerepresenting the leaf node is colored, sized or both according to chosen attributes. This is a good way to spot relevant dataand is good for categorized data, although the result can be cluttered when dealing with large data sets.3.5 Graph-basedGraph-based techniques visualize large graphs using algorithms and abstraction layers to present a clear overview of thegraph. E.g. in a graphical approach presented by Kilian Thiel, Fabian Dill, Tobias Kötter, and Michael R. Berthold published in[8], the extracted terms as well as the periods are represented by vertices's of a graph. The terms occurring in a certain periodare connected to the referring vertex. This kind of visualization is less intuitive when searching in large data sets but has theadvantage of being able to see relations and large amounts of data in a single graph.Figure 5: Visualization based on a network model [8].4

Erik Johansson-EvegårdElias HolmströmTNM033LiU, 2009-12-04Figure 5 is a good example of a graph-based visualization. Publishing dates of documents, as well as their terms arerepresented by the vertices's of a graph. Terms related to a specific publishing year are connected to the vertex of the year viaan edge. By usage of activation spreading techniques, terms frequently occurring in documents published in particular yearscan be discovered visually. [8].3.6 HybridHybrid methods integrate multiple visualization techniques in several or one window. An important aspect of hybrid methodsare linking between windows. Modifying or selecting data in one window shall affect others.3.7 InteractionTo make better use of many visualization techniques they are combined with different interaction methods. One discussedearlier is linking which enables selection and filtering on one visualization to affect another.In large visualizations FishEye zooming which is a detail on demand method can be used to give a better view of a specialpart of the visualization. This technique is especially well suited for large graphs or pixel-oriented techniques. Other methodsfor detail on demand could be tool-tips for extra information an a selected data or attribute.4. Applications4.1 Practical UsageNCVA at Linköping University [9] are using visualization for several practical tasks. By using hybrid methods combining glyphbased with geometric projection techniques and interactivity to create tools for as separate areas as weather,telecommunication and statistical exploration.Many of the techniques mentioned are used in all different fields. Especially glyphs are often used to visualize regional data ontop of maps, parallel coordinates to find correlations in multivariate data sets and scatter plots for finding them between alimited amount of attributes.At newsmap.jp Treemaps are used for data mining current news articles. It creates and presents an easily over viewed layoutof the biggest headlines of today based categories and countries.4.2 Visualization Tools Available in WEKAThe main focus of the software is algorithms for data mining tasks, therefore the visualization tools available in WEKA arelimited.Figure 6: Tree-graph visualization of hierarchical clusters.In WEKA it is possible to visualize the output of a few hierarchical clustering methods such as Cobweb as tree-graphs. Theoutput is not very intuitive and there is no possibility to rearrange the nodes and leafs to obtain a clearer result.5

Erik Johansson-EvegårdElias HolmströmTNM033LiU, 2009-12-04Figure 7: Scatter plot visualization of data set.The main visualization functionality in WEKA is focused around scatter plots. It is possible to compare different attributes.Available settings for appearance of the scatter plot are plot size, point size, jitter and colors.Figure 8: Bar diagrams of data set during pre-processDuring the pre-process step it is possible to visualize attributes as bar diagrams to uncover relations.5. ConclusionIn this paper we have presented a brief overview of different techniques that can be used for data mining using visualizationaccording to taxonomy by Keim in [1]. Among the techniques that are being used are parallel coordinates and glyphs formultivariate data and scatter plots for a limited amount of attributes. Using visualizations for data mining enables a user tomodel data on a large scale. With visualization it is possible to develop a model for example weather data within seconds thatwould be almost impossible with regular data mining methods.In WEKA the tool used for data mining in this course there are few tools available for visualization. These are tree-graph,scatter plots and bar diagrams.Different techniques are suited for different areas of usage. Compared to regular data mining visualizations are still a newsubject and therefore there are not yet as many practical situations where it is widely used.6

Data Mining and its Application in Marketing and Business